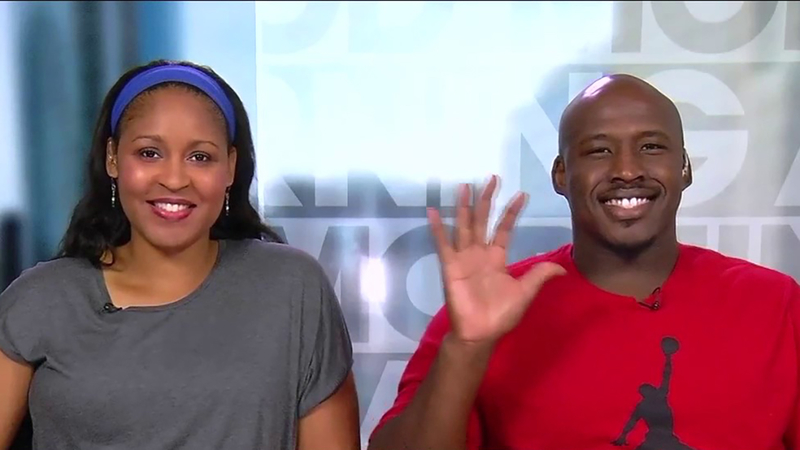 Following years of work by Moore and other supporters, Irons left Missouri's Jefferson City Correctional Center in July after serving nearly half of his 50-year prison sentence.

Video from that day shows the WNBA player clapping as Irons approached a group of people waiting for his release. She then dropped to her knees at one point before joining a group hug around Irons.

In an interview with "Good Morning America" Wednesday, the couple revealed that they've married in the two months after Irons' release.

Maya Moore and Jonathan Irons give an update on the 'Get Out The Vote" campaign and what everyone can do to help fight injustice.

Moore, who starred at UConn before helping lead Minnesota to four WNBA titles, put her career on hold last season to help Irons.

The 31-year-old Moore said she met Irons, 40, when she was 18 through prison ministry.

"Over the last 13 years we have just developed a friendship and just entered into this huge battle to get him home and just over time it was pretty clear what the Lord was doing in our hearts and now we're sitting here today, starting a whole new chapter together," she said on "GMA."

As their relationship grew stronger, they admitted their romantic feelings for one another.
"I wanted to marry her but at the same time protect her because being in a relationship with a man in prison, it's extremely difficult and painful. And I didn't want her to feel trapped and I wanted her to feel open and have the ability any time if this is too much for you, go and find somebody. Live your life. Because this is hard," Irons said.

He had been serving a 50-year prison sentence stemming from the non-fatal shooting of a homeowner in the St. Louis area when Irons was 16. But a judge threw out his convictions in March, citing a series of problems with the case, including a fingerprint report that had not been turned over to Irons' defense team, according to The New York Times.

Soon after he was freed, Irons popped the question.

"When I got out, we were in the hotel room we had some friends in the room, it was winding down and we were extremely tired, but we were still gassed up on excitement," Irons recalled. "It was just me and her in the room and I got down on my knees and I looked up at her and she kind of knew what was going on and I said, 'Will you marry me?' she said, 'Yes.'"

The couple said they're continuing their work as activists, working to spread work about local elections through Win With Justice's "Get Out the Vote" campaign. Irons said