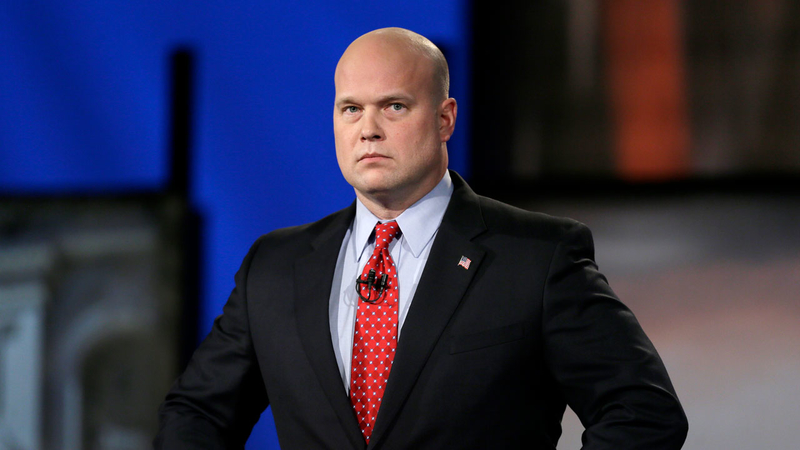 Whitaker is a former United States attorney from Iowa. He was appointed as the U.S. Attorney for the Southern District of Iowa in 2004 by President George W. Bush, according to the Department of Justice.

The Des Moines native is a former college football player who earned his undergraduate, business and law school degrees from the University of Iowa. Whitaker also ran in Iowa for United States Senate in 2014 but lost the Republican primary to Joni Ernst, who later won the seat.

Federal law makes it clear that Special Council Robert Mueller is overseen by the attorney general, so Whitaker is now in charge of the Russia probe. Sen. Chuck Schumer is already calling for Whitaker to recuse himself as Sessions had.

Given his previous comments advocating defunding and imposing limitations on the Mueller investigation, Mr. Whitaker should recuse himself from its oversight for the duration of his time as acting attorney general.

According to the New York Times, Whitaker is a "Trump loyalist," unlike his former boss, who maintained a turbulent relationship with the president during his tenure.

The Times reported that Sessions' former chief of staff frequently visited the Oval Office and was said to have an "easy chemistry with Mr. Trump."

Critics worry that Whitaker may be unlikely or unwilling to defend the Department of Justice's independence against political interference by the White House, given his history of partisanship and loyalty to Trump. Senate Minority Leader Chuck Schumer said Wednesday that Whitaker should recuse himself from overseeing the Mueller investigation given his previous public comments that appeared to exhibit hostility toward the inquiry.

During a brief stint last year as a conservative legal commentator on CNN, Whitaker often appeared as a Trump defender, saying he saw no evidence the president colluded with Russians during the 2016 campaign or obstructed justice. Whitaker wrote an op-ed for CNN titled "Mueller's investigation of Trump is going too far" which asserted that "Mueller has come up to a red line in the Russia 2016 election-meddling investigation that he is dangerously close to crossing."

He also said on CNN last year that he could see a scenario in which Sessions' replacement doesn't fire Mueller but "just reduces his budget to so low that his investigation grinds to almost a halt."

At the time the op-ed was written, Whitaker directed the Foundation for Accountability and Civic Trust (FACT), a conservative ethics watchdog group. It recently filed an ethics complaint against Sen. Elizabeth Warren and Sen. Kamala Harris for their fundraising emails ahead of the final vote on Supreme Court Justice Brett Kavanaugh's hearing.

He is currently a member of the University of Iowa Political Science Department Advisory Board and the National Association of Former United States Attorneys.