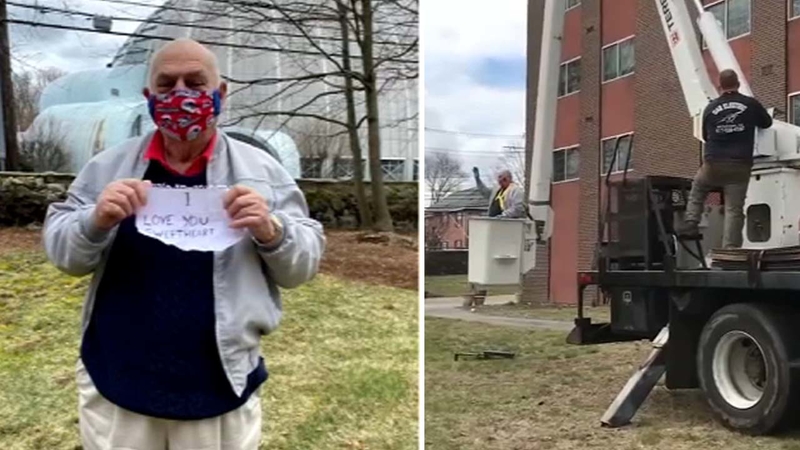 WATERTOWN, Massachusetts -- An 88-year-old man in Massachusetts went to new heights to see his wife during this COVID-19 pandemic.

Nick Avtges and his wife Marion have been married for 61 years, and in that time, had four kids.

One of their children, Michael, died in 1988 of leukemia.

Despite the hardships they've endured, they have managed to stay together every day, even after Marion entered a nursing home.

"I was generally there every day from about 10-11 o'clock in the morning until 7 at night," Nick told WFXT.

But for the past month, the pandemic has kept them apart.

So their children came up with an idea: put Nick in a cherry picker.

Nick, a New England Patriots fan, put on a mask representing his favorite NFL team and carried a handwritten note as he got into the truck.

He was finally able to see the love of his life again.

"When I got up there, my wife said, 'It's dangerous to get back down again,'" Nick said. "I asked my wife Marion, 'How much do you love me?' and she said, 'More than you will know.'"

"When he got up top there, you know, they kind of put their hands on the screen of the window. At that point, I kind of teared up," their son Chris described.

Nick says whenever people ask him what the secret is to a 61-year marriage he tells them it's that four letter word: love.

SEE ALSO: In sickness and in health: couple married for 45 years discharged after recovering from COVID-19
EMBED More News Videos

A couple married for 45 years was discharged after recovering from the coronavirus.