Man who led officers on chase after stealing ambulance was under arrest at hospital, HPD says 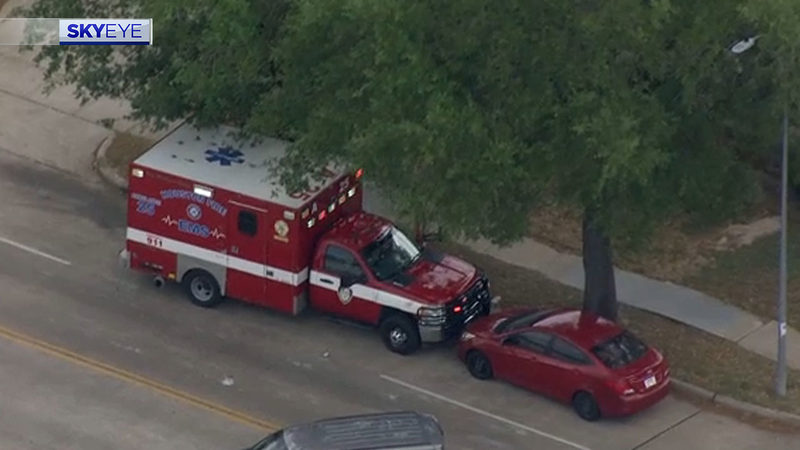 HOUSTON, Texas (KTRK) -- A man who stole an ambulance from Memorial Hermann Hospital and led officers on a chase Tuesday morning is now in custody, according to Houston police.

Officers responded to a call about the stolen ambulance at about 10:15 a.m. in the Texas Medical Center. Police said it ended when the suspect hit a parked vehicle near Harwin Drive and Boone Road in west Houston.

UPDATE: The suspect has been taken into custody.
We’ll have a media briefing shortly.#hounews https://t.co/RipJmPvabP

The man had already been arrested Monday for burglarizing a house, according to police. Prior to this arrest, he led officers on a foot chase but was eventually caught.

The suspect complained of an injury during this incident so he was taken to the hospital, according to police.

On Tuesday while at the hospital, the suspect asked a nurse to use the bathroom but the nurse offered a bed pan instead. That's when police said the man became agitated.

According to police, an officer handcuffed the man and a fight between the two erupted, leading to a chase through the hospital.

The suspect made it outside the building, where first responders where unloading a patient from an ambulance, and he hopped in and took off.

Police described the suspect as a Black man with tattoos on both arms.

No injuries were reported in the area where Tuesday's chase went through.

HPD Westside & K9 officers are searching the area of 11400 Harwin Dr near Boone Rd for a male suspect who stole an HFD ambulance from Memorial Hermann Hospital in the med center.

The suspect led officers on a pursuit until the ambulance struck a parked vehicle. 1/2 pic.twitter.com/g8Qe5F6geQ