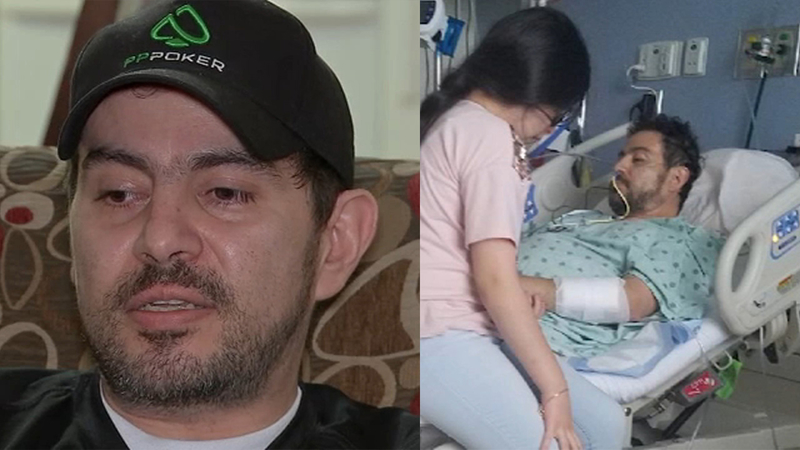 Security guard says he was shot 9 times by robbers

HOUSTON, Texas (KTRK) -- A man was working security at a game room in Houston's south end when he says he was shot nine times by robbers.

For Frank Farrell, family is everything. It's why he worked non-stop and it's what he thought about as he fought to stay alive after he was shot.

"A big part of trying to stay alive is because I couldn't say goodbye to my wife or to my family," said Farrell.

It happened on June 23 at a game room near Cullen Boulevard and the East Sam Houston Parkway. It's a night he says changed his life forever.

He was working when he says right before the game room closed at 9 p.m., three people came in posing as customers, two of which were father and son. Soon after, one of them pointed a gun at a female employee.

"He screams, 'Security, do not resist. This is a robbery,'" recalled Farrell.

Then, a second person pepper-sprayed Farrell in the eye. Farrell ended up shooting one of the suspects and says he showed mercy on him.

"I showed mercy and they showed no mercy," said Farrell.

He was shot nine times and one bullet hit him close to his heart.

"It was pretty much an execution," said Farrell.

As he rode in the ambulance, he recalled thinking about his family and prayed for his survival. Then, he remembered waking up in the hospital.

The father and son were charged in the case. The father died from his gunshot wound more than a month after the shooting. His son, Rolisver Rodriguez, is charged with two counts of aggravated robbery.

After six weeks of treatment, Farrell went home, but his recovery could last another nine months. During his healing, he is not able to work.

He says the hardest part of all it has been financially.

"My company didn't have workers' compensation," he said.

At first, he relied on savings.

"That money is gone. We have been relying on donations from the church," said Farrell.

His family set up a GoFundMe account to help with expenses. With his rent due soon, he's not sure how they're going to pay it, but he's grateful to be alive with his family.

"I believe that it was not my time," said Farrell.