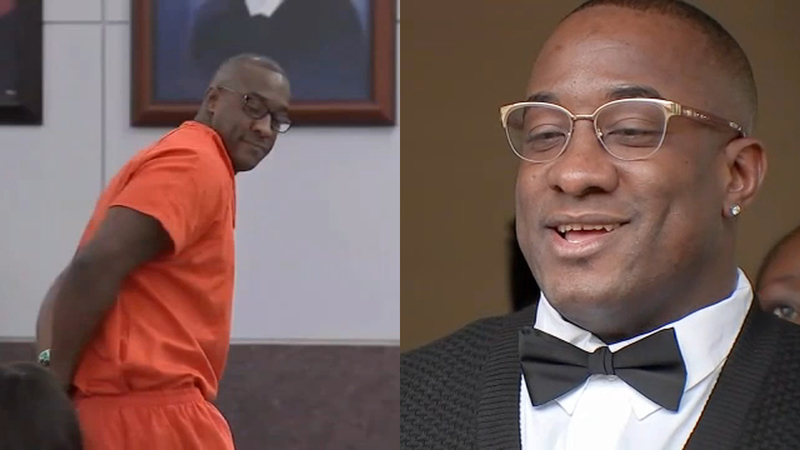 HOUSTON, Texas (KTRK) -- At 43, Lydell Grant is preparing to begin his life again.

Grant was arrested and convicted back in 2010 for the stabbing death of Aaron Scheerhorn, and was sentenced to life in prison. Re-examined DNA evidence showed he wasn't the killer.

The person whose DNA matched was arrested, and is said to have confessed to the murder in Atlanta.

"I thank God for being the light in the dark hole I was placed in and endured," he said.

Grant appealed his case up the chain in the Texas court system and eventually the federal courts, but all were denied. He tried to get media coverage on his case, but there was none.

The Innocence Project of Texas did agree to examine his case, and contacted a DNA analysis firm to look at the evidence. They found the initial DNA profile was incorrect, and matched it to a man who had gone on to commit more crimes while Grant was in prison.

Grant was released on bond last month, but had to wear an ankle monitor.
Saturday, by order of a judge, the monitor was removed. He sees it as a step forward to the future.

"I had a plan while I was at the bottom, I was plotting my comeback. I knew the day was going to come. I just didn't know when, but God showed up and showed out in my life," Grant affirmed.

For his mother, Donna Poe, the timing of her son's return fits the season. "What are the holidays without family? Now that I have my son back, I'm so overwhelmed with joy."

Grant said he's been contacted about returning to his career as a refinery pipe-fitter. "I do need some help in getting a car. I don't care if it's old, but I need transportation to get back to work again," he said.

He's hopeful God will answer that need as well.