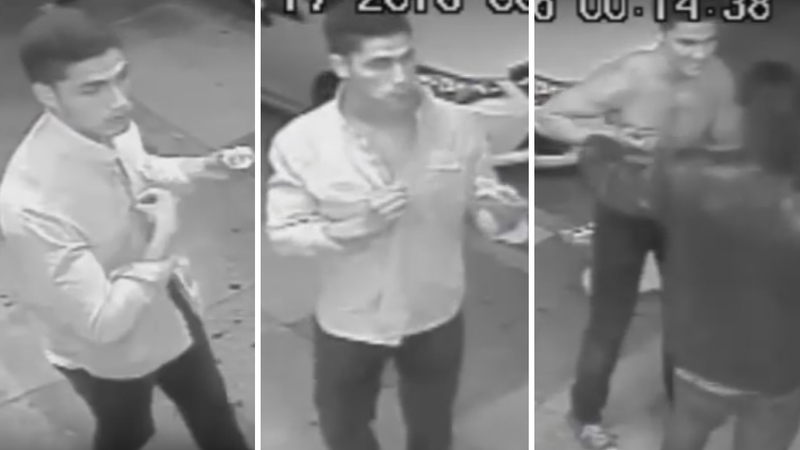 SAN FRANCISCO, CA -- San Francisco police have released surveillance video in the hopes someone can help identify a man who they say bit off a bartender's finger on July 17.

Police say they've never seen a case like it. It was the left ring finger, bit off at the knuckle by a man who reportedly tried to break back into the bar after closing time. The surveillance camera did not record the actual attack, but does show the suspect and a friend outside the restaurant.

According to officials, the man wanted back into the Silver Clouds Restaurant and Karaoke Bar so badly after closing time that he tried to break in through a window, got into a fight with the bartender, and eventually bit off that bartender's left ring finger.

"It was during that time that he was trying to restrain him that his hand was close to his mouth, and that's when the suspect bit his finger off," Officer Carlos Manfredi said.

The restaurant was closed today, as it always is on Mondays.

No one from the restaurant could talk about what happened and police have not revealed the victim's identity.

But they have been looking at surveillance video for a month hoping for a lead on the suspect, and getting nowhere.

The officer showed abc two video clips. One shows the suspect by himself outside the restaurant.

The second shows him after he'd removed his shirt and started wrestling with a friend.

An identification of either person would help the investigation.

"All we need is one name for one lead," said Manfredi. "And then that can open up a whole new door and we can actually make an arrest."

As for the victimized bartender Manfredi says, "He was able to take his finger with him to the hospital. They tried to put it back on, but they weren't able to save the finger. So now unfortunately this bartender now has some type of prosthetic finger to replace that."