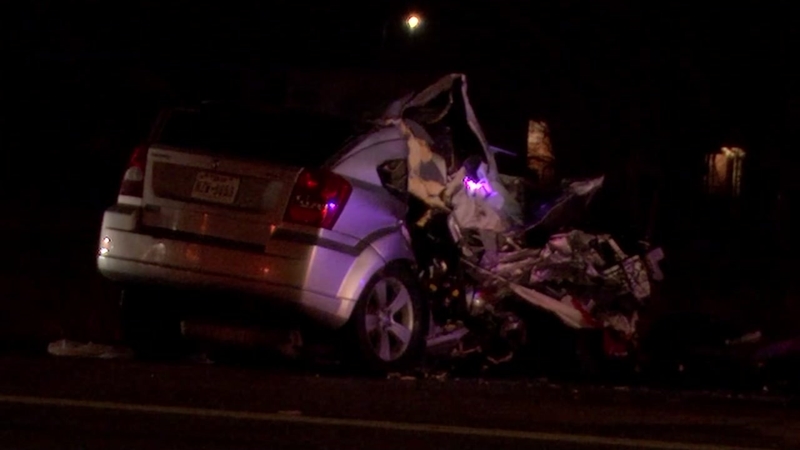 HOUSTON, Texas (KTRK) -- A man on his way home from the airport in the backseat of a Lyft was killed early Friday morning when two pickup trucks and a car collided.

It happened in the Clear Lake area around 1 a.m. on Galveston Road near the Pineloch intersection.

The Lyft driver, 29-year-old Ezatullah Safi, is in a coma.

Safi, an Afghan refugee, has a wife and two kids. Friends of the family said they came to the U.S. for a better life. A GoFundMe account has been set up to help Safi and his family with expenses

LYFT DRIVER IN COMA, PASSENGER KILLED: This is Ezatullah Safi, he is the Lyft driver who was injured in a 3-vehicle crash that killed his passenger, Billy Satterfield. Another man is accused of driving drunk, causing the fatal wreck. https://t.co/2rVUAp6mGH pic.twitter.com/HBvEyCpuaC

Please pray for this man, friends. 🙏🏻 Ezatullah Safi is the @lyft driver hit by a drunk driver overnight. An Afghan refugee who wanted to give his family a better life. He’s now in a coma -> https://t.co/lxVomsNdwA. #BREAKING #abc13 #hounews pic.twitter.com/qZBT3hDvsT

Authorities say Erik Deleon, 21, was driving a gray Dodge truck heading northbound on Galveston Road when he clipped the back end of a smaller, silver Mazda pickup, and kept going through the intersection. The Dodge then slammed into the Lyft car.

Officials told ABC13 that the passenger, Billy Satterfield, was texting with his wife moments before he was killed. He was less than five miles from home.

Dr. Satterfield had been employed at University of Houston-Clear Lake from 2007 until last year.

The university issued the following statement: "Dr. Satterfield helped shape and strengthen the services provided by University of Houston-Clear Lake's Financial Aid Office and the Registrar's Office during the university's transition to a 4-year university. UHCL offers condolences to Dr. Satterfield's family, friends and all who knew and loved him."

Sources say the 21-year-old told officers on scene he was pounding tequila shots at a bar just before the crash. Bar receipts were found in his truck.

They are looking at Studio 80 in Webster and Bombshells on the Gulf Freeway, both who are owned by the same company.
The DA's office has issued subpoenas to the parent company to seek information. They will receive surveillance video and look at receipts to determine if DeLeon was overserved.

They say Bombshells is cooperating with the investigation.

"The ownership of Bombshells has been very cooperative over the last year, Teare said. "They have been very proactive in alleviating these issues. We've seen a downturn from Bombshells."

The driver of the silver Mazda truck, that investigators say Deleon clipped, was also arrested. Investigators say he was drunk, stopped at a red light. He failed a field sobriety test.
While ABC 13 was reporting on the initial accident, a second crash occurred. A driver crashed into two HPD cars set up as a roadblock on Galveston Road. Police say he was also intoxicated. He was arrested.

Lyft gave ABC13 the following statement: "We are deeply saddened by the news of this tragic accident and resulting loss of life. Our thoughts are with all those impacted. We have reached out to those involved and stand ready to assist law enforcement with their investigation."

AND THEN -- GET THIS -- *another* intoxicated driver slammed into two HPD cars while officers were investigating Highway 3 drunk driving scene. #abc13 https://t.co/SPiQWljsJW pic.twitter.com/edwHsTc6Uk

The driver, Isreal Suarez Lugo, has been charged with intoxication manslaughter after the 5-year-old died.