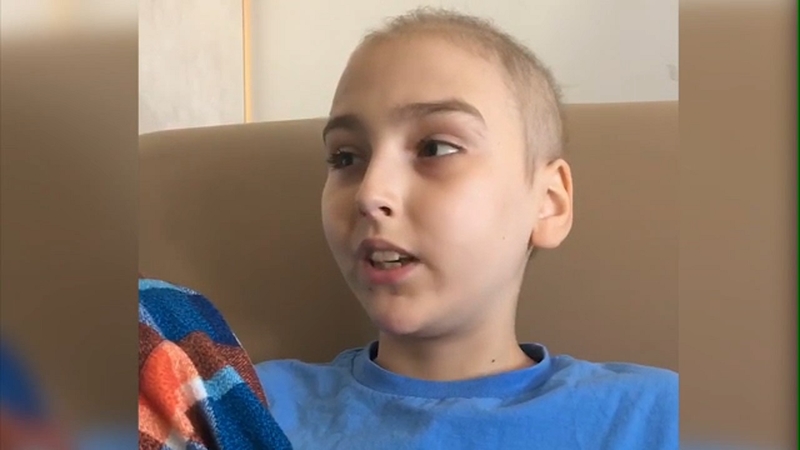 HUNTINGTON, Long Island -- The mother of the boy who has been fighting to have her son removed from court-ordered chemotherapy treatment will now have to turn her son over to a temporary custodian.

Candace Gundersen of Huntington, New York has been fighting to regain custody of her son Nicholas Gundersen, 13, from Suffolk County Child Protective Services.

A family court judge decided Friday to turn the child over to Gundersen's family friend who will serve as Nicholas' temporary custodian.


"At this point, I actually genuinely feel that I have failed him because they have literally taken away my ability to protect him and look out for him in the very best way I know how," Gundersen said.

Nick is receiving court-ordered chemotherapy at NYU Winthrop Hospital in Mineola. In a video statement to the media, Nick said he is being held hostage.

"I'm very mad because this is supposed to be outpatient. I don't have cancer. So there's no need for chemotherapy. I need to get out of here because it's causing me a lot of stress. I can't deal with it anymore," he said in tears. Nick has to wear a GPS tracking device on his wrist while at the hospital.

Nick was diagnosed by doctors at Cohen Children's Medical Center with a rare form of acute leukemia in June 2018. Gundersen said she asked doctors if she could get a second opinion before Nick began chemotherapy on June 30.

"They told me if I didn't consent to the treatment they would call CPS and have me removed and my son would have the treatment anyway," Gundersen told WABC-TV. "So I signed the consent."

Gundersen, who is a holistic wellness coach, said Nick was hospitalized for 30 days and suffered an adverse reaction to the chemotherapy.

"He lost over 20 percent of his body weight. He developed typhlitis, which is a life-threatening bowel infection, he had fluid in both his lungs, he was bedridden. He stopped breathing on numerous occasions, he was on oxygen," she said.

He was discharged on July 24 and continued with outpatient appointments until Aug. 29. That same day, doctors tried to admit Nick but his mother refused. A doctor there called CPS. Cohen Children's said in a statement to WABC that it can't comment specifically on the case other than to say Nick was accurately diagnosed and provided appropriate treatment.

On Sept. 2, Gundersen said police officers and CPS showed up at her house at 3:30 a.m. and seized Nick and forced him to return to Cohen. On Sept. 11, Gundersen had Nick transferred to NYU Winthrop, where he continued with chemotherapy.

In mid-October, doctors at NYU Winthrop informed Nick's family that the cancer was gone, but informed the family that Nick would need three years of chemotherapy, which is considered the standard of care. Gundersen refused, opting for her son to have what she called non-toxic preventative treatments, which she said keeps the cancer in remission.

"I want him to have a long healthy life and I want him to have that opportunity. If he is forced to do this chemotherapy treatment for the next three years, that's not what will happen," she said. "I feel we should be allowed to have choices, especially when they're less toxic."

On Oct. 14, Gundersen took Nick to Florida to meet with a group of doctors for the preventative therapies. When Nick did not return to NYU Winthrop for chemotherapy on Oct. 15, CPS called Gundersen.

CPS brought an emergency removal proceeding on Oct. 19 to seize control of Nick. Dr. Mark Weinblatt of NYU Winthrop testified a week later before a Suffolk County family court judge that Nick was in imminent danger of death. On Oct. 26, the judge granted custody of Nick to CPS and ordered him back to Suffolk County. Nick left Florida and was admitted on Oct. 30 to NYU Winthrop.

J. Edmund Keating with NYU Winthrop said in a statement to WABC:

"It has been clear for at least 20 years that the state of 'remission,' at least in its initial stages, does not mean a 'clean bill of health.' It simply means that the cancer cells are not detectable, but remain in the blood in small amounts. However, unless chemotherapy is continued, those cells can once again multiply, and the results are usually fatal. Those who oppose the use of chemotherapy following an initial finding of 'remission,' while they may be well-intentioned, are risking the life of a child without any scientific rationale."

Under the temporary custodian agreement, Gundersen will be able to live at a custodian's home in Huntington with Nick and to accompany him to all doctor's appointments. She is not permitted to give him any medications and cannot take him off Long Island.