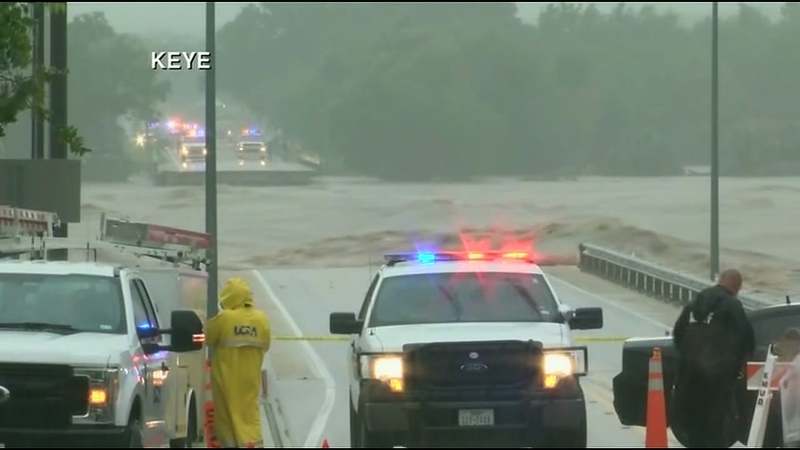 LLANO, Texas (KTRK) -- Gov. Greg Abbott declared a state of disaster for 18 counties in Central Texas after a day of devastating floods destroyed a bridge, forced the evacuation of riverside homes and led to numerous water rescues.

Cpt. Tom Dillard, with the Burnet County Sheriff's Office, told Eyewitness News on Tuesday night that the worst hasn't even hit yet.

Another flood surge is expected to hit overnight Wednesday.

Dillard says they are expecting the late night floods to be as bad as it was Tuesday morning, the only difference: The waters are expected to rise in the dark, adding another level of danger for those living in the region.

Video from early Tuesday shows the FM 2900 bridge crumbling as it is overrun by the bloated, roiling Llano River in Kingsland, about 65 miles northwest of Austin.

The Llano and Colorado rivers meet at Kingsland and the National Weather Service said both were experiencing "major flooding." A flash flood warning was in effect.

Residents were being evacuated from homes in Kingsland and nearby Marble Falls, which was being overwhelmed by the Colorado River. Several school districts closed for the day and emergency personnel blocked access to more than 150 low-water crossings.

The floods have even proven deadly, Dillard telling Eyewitness News they did recover a body from Lake LBJ Tuesday afternoon. While they have not identified the person, we're told they do believe the man died as a result of the high waters.

The First Baptist Church of Marble Falls opened a shelter housing 50 evacuees and their pets. The operation has room for 200 and Pastor Ross Chandler says they plan to be open around the clock as long as they are needed.

"We have about 85 residences that have some sort of damage," said Christina McDonald, the Public Information Officer for Marble Falls.

Homes also were being evacuated in nearby Granite Shoals and people were sheltering at a middle school.

Dire early warnings of the potential for a record crest of the Llano River at Llano have subsided. The water level there rose to just under 40 feet but fell as the morning progressed and settled at little more than 35 feet as of 11 a.m. Tuesday, the weather service said. Major flood stage is 23 feet; it's not expected to drop below major flood stage until Wednesday.

Other parts of the state also suffered due to heavy rain.

Flood warnings were issued for areas north of Houston.

The Fort Worth Fire Department said it responded to some 80 traffic accidents blamed on slick roads and poor visibility Tuesday morning. Officials in Dallas said the rain was causing sewer overflows in several parts of the city but added that its water supply wasn't affected.