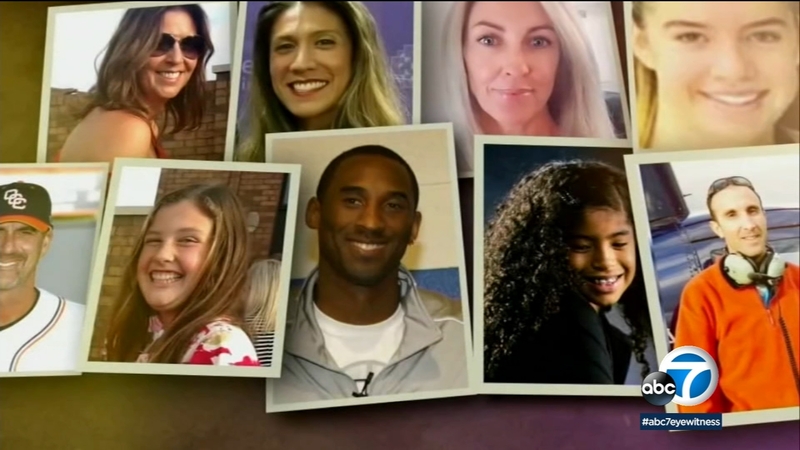 Feds to name likely cause of Kobe Bryant helicopter

CALABASAS, Calif. -- Vanessa Bryant wants to publicly name the Los Angeles County sheriff's deputies accused of taking and sharing photos of Kobe Bryant and other victims at the site of the Calabasas crash that claimed the lives of the NBA superstar and eight others.

In an Instagram story, Vanessa Bryant criticized the Sherriff's Department for trying to redact the names of the accused deputies.

She noted that in any other situation the suspects names would be unsealed. She described the move as a double standard.

The Sheriff's Department has said it will not be commenting at this time.

The National Transportation Safety Board primarily blamed pilot Ara Zobayan in the Jan. 26, 2020 crash that killed him along with Bryant, the basketball star's daughter and six other passengers heading to a girls basketball tournament.

Calabasas residents recall the tragic morning when the helicopter that carried Kobe Bryant, his daughter Gianna and seven others went down.

Zobayan, an experienced pilot, ignored his training, violated flight rules by flying into conditions where he couldn't see and failed to take alternate measures, such as slowing down and landing or switching to auto-pilot, that would have averted the tragedy.

The NTSB said it was likely Zobayan felt pressure to deliver his star client to his daughter's game at Bryant's Mamba Sports Academy. Officials believe Zobayan may have also felt "continuation bias," an unconscious tendency among pilots to stick with the original plan despite changing conditions.

The agency announced the long-awaited findings during a four-hour hearing pinpointing probable causes of what went awry in the 40-minute flight. The crash led to widespread public mourning for the retired basketball star and several lawsuits, and prompted state and federal legislation.

The bill being called the "Kobe Bryant and Gianna Bryant Helicopter Safety Act'' would require the equipment on all types of helicopters with six or more passengers.