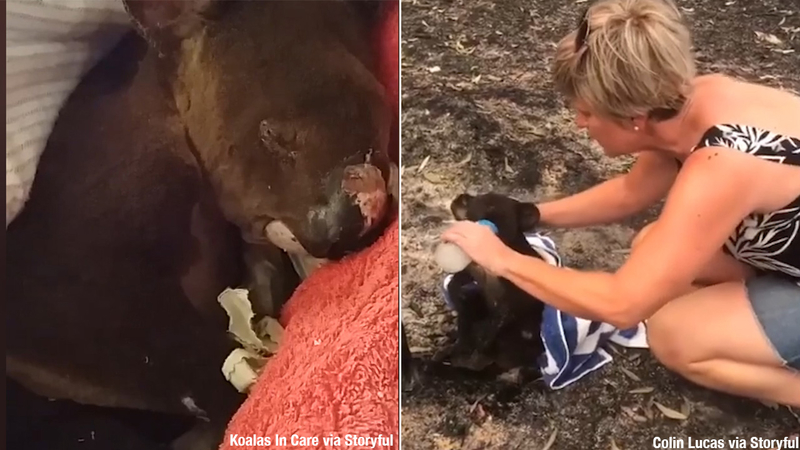 Kristen and her husband Colin found the injured animal sitting in a pile of ash in New South Wales, Australia, an area recently devastated by bushfires that killed at least four people and hundreds of koalas.

As the catastrophic fires have burned more than two million acres, more videos of koalas being rescued and treated are emerging.

Yet conservationists fear that these koalas are the lucky ones. Estimating the number of deaths is difficult at the moment, as about 60 fires were burning in the area on Thursday morning, with 27 uncontained while being battled by more than 1,000 firefighters, the Rural Fire Service said.

"If we look at a 50% survival rate, that's around about 350 koalas and that's absolutely devastating," Ashton said of the death toll.

"We're hoping it's not as bad as that, but because of the intensity of the fire and the way koalas behave during fire, we're not holding out too much hope," she added.

Koalas climb high into trees during wildfires and survive if the fire front passes quickly below them. Yet even when the fire doesn't reach treetops, the animals may become overheated and fall to the ground.

Looking into the future, scientists are becoming increasingly concerned about the fate of the marsupials, fearing the threat of climate change on their existence, according to The New York Times. Australia is prone to wildfires and has the highest rate of species extinction, some estimate.

Nonprofit organizations like Koalas In Care Inc. are providing much-needed relief in this dire situation.

On Monday, the charity posted a picture of "Sootie," showing an adult male scorched, with all four paws burnt and an irritated nose.

The following day, it posted a second video showing the koala eating leaves.