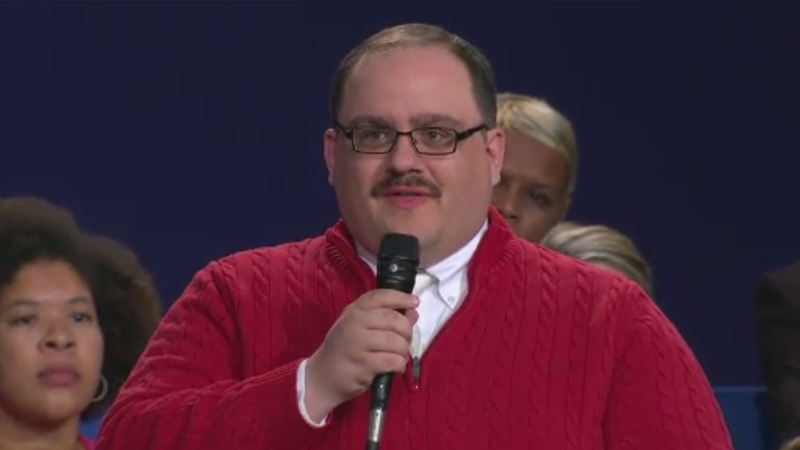 ST. LOUIS -- Donald Trump and Hillary Clinton may see their poll numbers rise or fall in the aftermath of Sunday night's presidential debate, but one man seems to be receiving universal acclaim for his role in the event: Kenneth Bone.

Clad in a red sweater, khakis and white dress shirt with matching tie, the undecided voter almost instantly became an internet sensation when he posed the penultimate question to the GOP and Democratic candidates at the town hall in St. Louis.

Bone's unassuming manner in subsequent interviews have only added to his popularity.

"I had a really nice olive suit that I love a great deal, and my mother would've been very proud see me wearing on television," told CNN on Monday. "But apparently I've gained about 30 pounds and when I went to my car the morning of the debate, I split the seat of my pants all the way, so the red sweater is plan B and I'm glad it worked out."

In an interview with radio station KFNS, the mustachioed power-plant worker also noted that he was unaware of his initial fame because audience members were not allowed to bring smartphones into the venue.

Several people on social media commented with bemusement when Bone was seen using an apparent disposable camera to snap a photo of the debate stage.

"I went from, last night, having seven Twitter followers -- two of which were my grandmother because she had to remake her account when she forgot her password -- to now I have several hundred," Bone told CNN.

"I don't know why they care what I have to say," he said of his newfound fans, "but I'm glad they're engaged in the political process."

Asked about his planned costume for Halloween, he responded that he is "going as myself."

"It will be the best costume ever," he said.