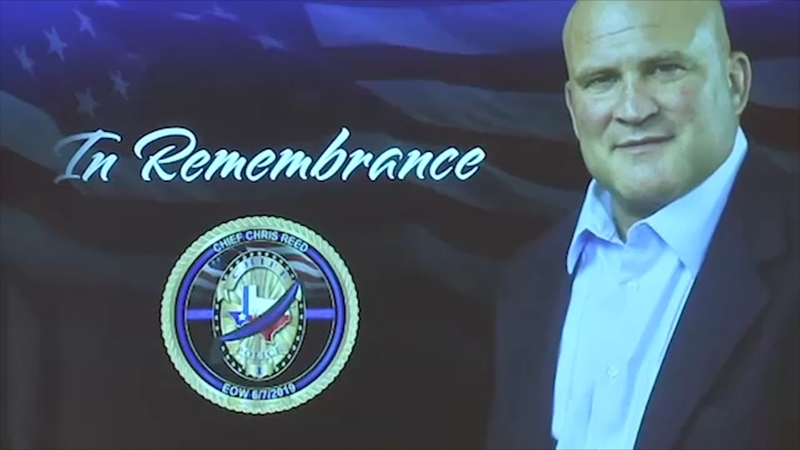 Before the service at Clear Creek Community Church began, American flags were placed outside to honor Reed, who was a former Army paratrooper. He was honorably discharged in 1990.

Traffic was stopped as the Kemah Fire Department raised the flag for the memorial, which is also occurring on Flag Day.

I got choked up watching this flag raise. I didn't get a chance to know Chris Reed but through the stories I've been told I feel like I do. He is the standard we should all strive for. RIP @abc13houston pic.twitter.com/m1tHHV2r4R

More than 500 law enforcement officers attended the service, along with people from the city of Kemah and surrounding communities.

"It's a good way for people to get out and pay their respects even though it was an awful tragedy," said Kemah resident Dylan Collins.

We join Kemah Police Chief Chris Reed's family and friends, the Kemah Police Department, and the entire Kemah community today in honoring Chief Reed as he takes his final ride through the city he loved and served. Rest in peace, Chief. Rest in peace. pic.twitter.com/VkYfuQCvVh

"Dad, today you go to a place I am not ready for, and you'll have to go there without me. But know that I love you and I thank you so much for your unconditional love. Rest easy, Daddy," Logan said.

Reed and his wife Jana were high school sweethearts. She was a cheerleader, and he was a wrestler.
Public service and being an officer were passions of Reed's from an early age as he graduated from the Military Police Academy. He was a certified military policeman.

At one point in his career, Reed was a professional MMA fighter known as the "Celtic Tiger." Close friend TJ Aulds says Reed donated 100% of his winnings to local children's charities.

Before the service, friends shared emotional stories about their time spent with Reed.

"I'm going to miss him. I'm truly going to miss the man. There's this photo of when he retired from MMA, a lot of us couldn't make it to Louisiana to see his final fight. So we had a party at a friend's house to watch the fight on tape, and there's a photo where he puts me in a headlock, and I'd asked for that. And I cherish that photo, and I cherish that man. And if anything, I just want to be able to live like him," said Aulds.

Hundreds of Law Enforcement Officers and surrounding communities around Kemah are preparing to pay their respects to Kemah Police Chief Chris Reed. Thank you for your service Chief. Rest easy my friend. #HouNews #kemah #ThinBlueLine pic.twitter.com/evbALGDWhQ

After the service, there was a miles-long funeral procession that passed by different spots around the city that were important to the chief.

The procession traveled south on FM 270 to Highway 96, then east to Highway 146 in front of the Kemah Police Department and City Hall, as well as along Nasa Road 1 near the Nassau Bay City Hall.

Instead of flowers, Reed's family has asked that donations be made to any one of the following organizations: Texas EquuSearch, Communities in Schools, or the Concussion Legacy Foundation.