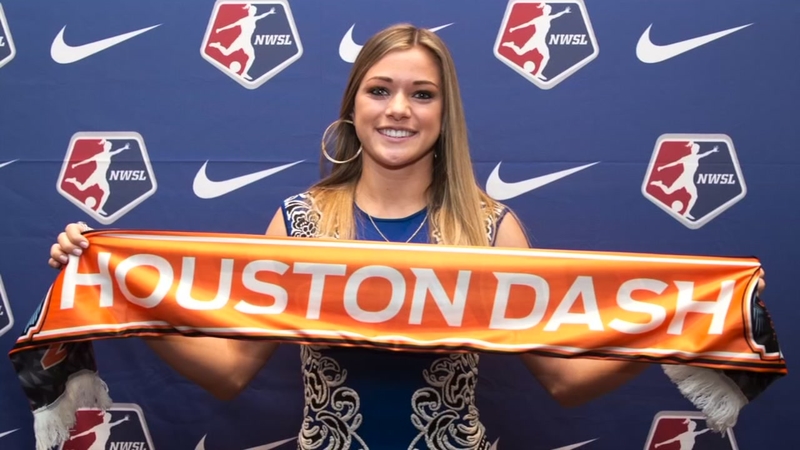 Houston Dash captain talks life on and off the field

HOUSTON (KTRK) -- When injured Texans star JJ Watt threw out the first pitch in game three of the World Series, he had some extra support next to him.

Kealia Ohai, the towhead seen clad in jeans and sneakers, is not just his girlfriend but one of the captains of the Houston Dash women's soccer team.

Ohai was by his side as he hobbled out to the pitcher's mound. It was a high-profile outing for the couple though most days, their lives are far more low-key and career focused.

Case in point, when the Dash star tore her ACL months earlier, sidelining her for the season, it was Watt who was right by her side.

"If I'm ever down or feeling sorry for myself, he doesn't allow that and that's helped me a lot," said 25-year-old Ohai.

They may be a known commodity now, but their two-year relationship started as a friendship when Watt showed up to a Dash game.

Ohai says one of the reasons their relationship works is because they both understand the territory that comes with not having a 9-to-5 job.

Now on the mend, Ohai dreams of one day making the U.S. Women's National Soccer team and winning a championship with the Dash. To do it, she visualizes obtaining her goals and achieving success.

"I write down every day where I want to be at the end of my career and I write it as if I'm in present tense, so like, 'I'm the best player in the world, I'm a World Cup Champion'," Ohai said.

She played for the University of North Carolina before coming to the Houston Dash as a forward in 2014. Three years later, she is now a team captain.

"What's cool with this team is we have so many leaders and so many national team players and just so many great people, so it's easy to be a leader on the team," she said.

With the amount of success she's had on the field, it is hard to believe she is blind in her right eye, though she's never let it set her back.

Instead, she uses lessons on perseverance to mentor young girls and help children at Texas Children's Hospital.

"The cameras --even sports--for me, it's not as fulfilling as helping, changing someone's life in a very small way if you can," said Ohai.

Even with her good works, Ohai is definitely not one for the spotlight. She says she prefers time with her nephews to a night out. So dating one of Houston's buzziest athletes was tough at first with all the media attention.

However, it is their low-key relationship that keeps the two connected.

"We'll go out to dinner, then we usually have a show that we love that we're into that we'll watch, or mostly it's just at home on the couch or swimming, you know, very low-key," said Ohai. "I'm not out a lot."

Much like Watt, Ohai's heart is here in Houston.

"When someone says 'Where do you live or what's your favorite place?' It's always Houston, I love Houston and so for me, it means a lot to be here and play for this city. And, yeah, I love it," she said.

Meet five of the legendary power couples who are making headlines no matter what they're doing around Houston.