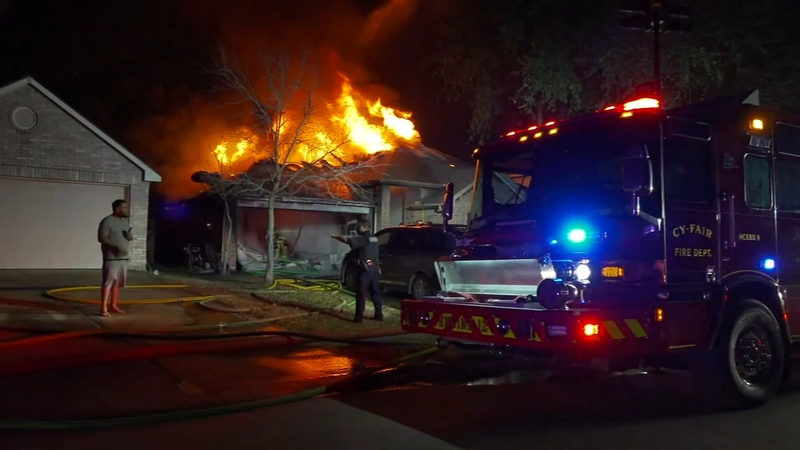 KATY, Texas (KTRK) -- Cy-Fair firefighters rescued two people from a house fire overnight after a father was desperately trying to save his family, and the entire rescue was caught on helmet camera video.

Northwest Harris County neighbors noticed a garage fire at a home in the 21500 block of Wellsford Glen Dr. before 11 p.m. Wednesday and called 911.

Crews respond to a 1-alarm residential fire in the 21501 Wellsford Glen Dr. Wednesday in Katy.

Medics performed CPR on both and transported them in critical condition to @memorialhermann TMC. #hounews pic.twitter.com/RGvK6gKnXt

Firefighters say three adults live in the home, a husband, wife and their adult daughter.

Before firefighters arrived, officials say the husband helped escort his wife, who uses a wheelchair, out of the home. He then went back into the burning house to try and get his daughter.

When firefighters arrived at the scene, they went inside to rescue the husband and daughter. Officials say by the time they pulled them out of the fire, neither adult had a pulse and they both suffered from smoke inhalation.

The third patient was evaluated by @cyfairfd EMS on-scene but was not transported.

The @RedCrossTXGC is assisting the displaced family.

Medics reportedly resuscitated both critical patients before transporting them.

"The elderly adult female who exited the home before firefighters' arrival, her husband, the adult male patient, helped get her out, then reportedly went back in the home to get the adult female out," Capt. Daniel Arizpe with the Cy-Fair Fire Department said. "At that time, neighbors and Harris County Sheriff's Office deputies helped roll the wheelchair-bound woman to safety on the sidewalk until firefighters arrived."

Incredible helmet camera video from the fire department gives viewers a good perspective of just how big the fire was.

Fire crews started CPR after the rescue and were miraculously able to revive the father and daughter.

Firefighters say the pair was transported to Memorial Hermann where they are in critical condition.

Neighbors say the husband and wife are in their 60s.

HCFMO investigators are on scene of a house fire in the 21500 block of Wellsford Glen Dr at the request of @cyfairfd. One adult male and one adult female have been transported to the hospital in critical condition. The origin and cause investigation is ongoing. pic.twitter.com/gGd8vO8Gvz

Fire officials do not know the cause of the fire. They believe it started in the garage of the home and spread.

The Harris County Fire Marshal's Office says the fire rescue was extremely dangerous due to the amount of smoke.

OVERNIGHT HOUSE FIRE: A father & his adult daughter are in critical condition after an early morning house fire near W Little York & Fry. The father rescued his wife before going back inside to get his daughter. Firefighters pulled both adults from the home. pic.twitter.com/6gZ1UNK7NN