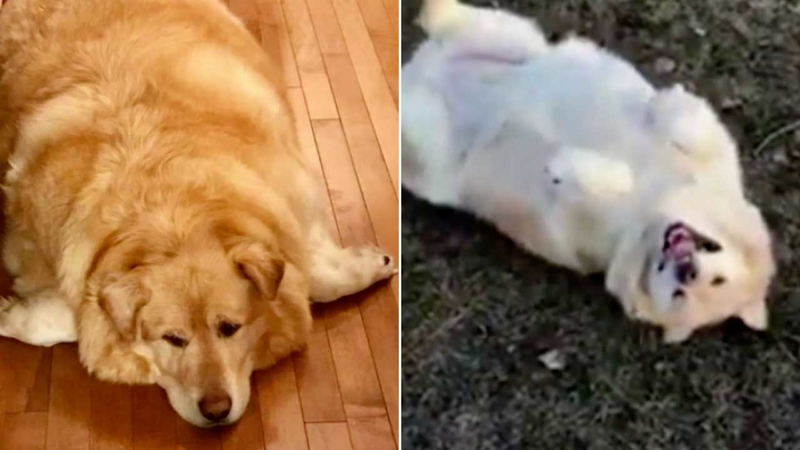 In March 2018, Kai, a golden retriever in Alberta, Canada, who weighed about 170 pounds, was taken to the vet to be put down.

Instead, the vet decided to contact Misfits of Alberta Animal Rescue, who matched Kai with a foster mom. The vet told his foster mom, Pam Heggie, that his weight was making it really difficult for him to get around.

Today, Kai has maintained a healthy 70 pounds for months and Heggie has adopted him.

"He shows you how to do a really big task literally one day at a time," Heggie told "Good Morning America." "He doesn't worry about yesterday, he doesn't worry about tomorrow, he just focuses on what needs to be done today and he does it. We can learn a lot from dogs."

Kai and Heggie celebrated the results of the incredible transformation on "Good Morning America" on Friday.

Heggie said she doesn't know much about Kai's history before the day she started fostering him, other than that he was supposed to be put down. Heggie said she thinks the reason the vet decided to find a different path for Kai is his personality, saying, "He was always extremely loving. Extremely."

Kai had an uphill battle to climb. A vet called him the most overweight animal he'd ever seen. That first day at home, Heggie said it took Kai 20 minutes just to climb the stairs.

Heggie worried at first whether she'd be able to help him.

Heggie took Kai for three walks a day, no matter the weather in Canada.

"Snow, rain, sleet, boiling -- we went out every single day," she said.

She said each walk got a little bit longer. They also incorporated water therapy to strengthen his legs.

Heggie said the reason she documented Kai's journey on a Facebook page is because she hopes it spreads a message about the importance of motivation.

"No matter what big goals you set, if you're just consistent and you do one little piece at a time, you'll get there," she said.