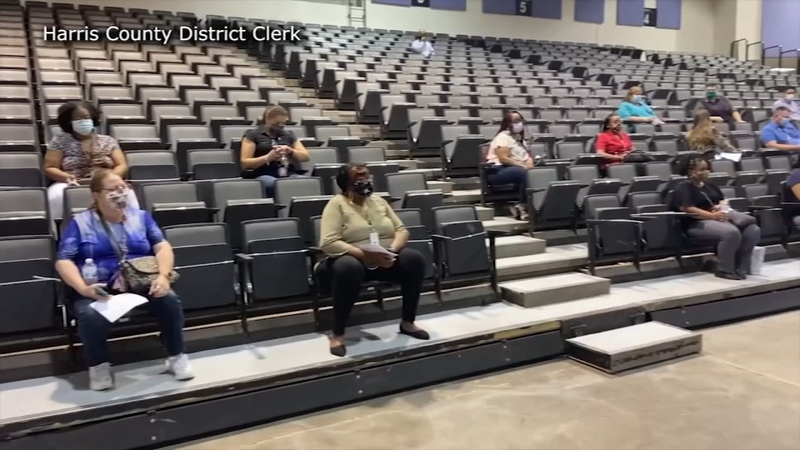 Jury trials set to resume next week after 2 month hiatus

HOUSTON, Texas (KTRK) -- Court proceedings in Harris County have taken a big hit during the pandemic as officials search for safe and effective ways to continue hearings.

NRG Arena has been designated as the site for jury selection since August, which caused courts to stop jury trials for the last two months during the Junior Livestock Show.

Civil Judge Robert Schaeffer, who also serves as the local administrative district judge, said the process they have put in place has been very effective at getting cases to trial. For the month of April, 174 courts are requesting a jury for trial, compared to 106 in January.

There are four courtrooms set up at NRG Arena that allows them to select four juries a day.

"For April 5, there are 17 courts that have asked for a jury," Judge Schaffer said. "If we can only pick four juries at NRG Arena, those courts are not all going to go."

Some, he said, will settle outside of court. Judges are already seeing this happen once attorneys realize in-person trial dates are set.

"I talked to a judge just yesterday who had a case going to trial on April 5, but when the lawyers realized it was a real trial setting, last night the case settled," Schaffer said.

Data shows less than 1% of criminal trials go before a jury in Harris County, but Schaffer said it is the threat of it that causes cases to move.

ABC13 Investigates uncovered that the backlog of cases has grown by 60% since last March when the pandemic began to 39,201 cases.

Schaffer said Hurricane Harvey did a number on the court system and they were just digging their way out of that months before the pandemic started. He believes it will take years to get back on track.

"We are quite a bit away from being able to have a jury trial whenever we want or need one," Schaffer said.

Courtrooms have been reimagined to create a safe environment for everyone involved. The jury now sits in the gallery with one person per bench and witnesses now testify from the jury box. Tables where lawyers sit now face where the witnesses testify rather than the judge. The judge and court reporter are now surrounded by plexiglass.

The courtroom is equipped with cameras so proceedings can be live streamed since no spectators are allowed.

Schaffer said to call him old school, but he believes there is a major benefit to trying cases in-person rather than on Zoom.

Joe Vinas, president-elect of the Harris County Criminal Lawyers Association, said defense attorneys are seeing red flags long before they get into the courtroom. In the fall, Vinas spoke during Harris County Commissioner's Court hoping to dissuade them from approving funding for jury selection at NRG Arena.

"You've got people who are so far away from you that you can barely tell that's a human being in that chair with a mask over their face and a shield," Vinas said. "It creates this impersonal barrier that is insurmountable to communicate with these jurors, so you can find out who they are and what their feelings are on certain issues and that is critical."

Typically, jury participation is less than 25%. Judge Schaffer said it is now in the low teens.

He said his clients, some of who are in jail, do not want their day in court right now under these circumstances.

"They understand they should not have to choose between a fair trial and a speedy trial," Vinas said.