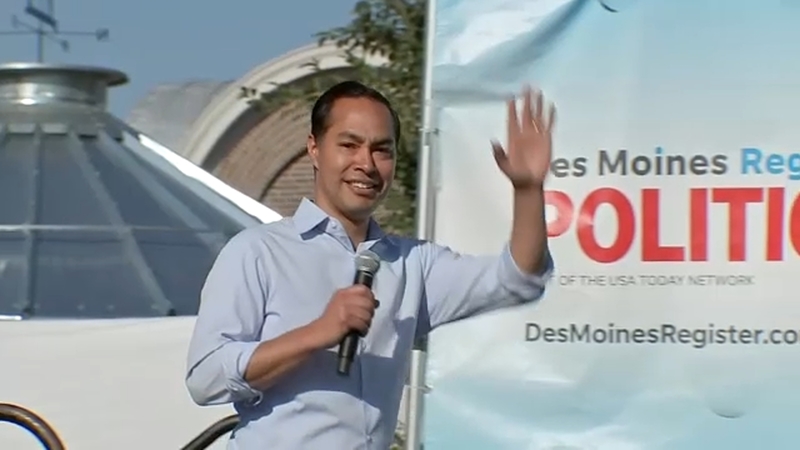 DES MOINES, Iowa (KTRK) -- Day two of the Political Soapbox at the Iowa State Fair is in the books in which five more candidates took the stage, two of them with deep Texas roots.

It's a time-honored tradition for Iowans to hear from the men or women for whom they'll caucus in February.

.@JulianCastro “I’m convinced our nation is destined to be the smartest, healthiest, fairest, most prosperous on Earth.” #abc13eyewitness pic.twitter.com/GRKPIeNwbe

"If I'm elected president, then I will keep my eye on the ball and I will work hard every single day," said Castro.

Castro is a more traditional candidate. Andrew Yang is not.

“I was an unhappy attorney for five months. I know you could automate that job”—@AndrewYang on the threat of automation taking away good paying jobs. #abc13eyewitness pic.twitter.com/sGfywf8zZv

"There's an Asian man running for president who wants to give everyone $1,000 a month, right?" said Yang.

The entrepreneur with no political experience is calling for a freedom dividend, which would pay every American citizen $1,000 a month.

He just qualified for the Houston debate, only the 9th among two dozen candidates.

"We raised over a million dollars in the days after the last debate and that was with less airtime than other candidates," said Yang. "So, if you do the math, if we get twice as much airtime, we're going to raise twice as much money."

Houston native and New York Times best-selling author Marianne Williamson isn't a politician either. She wants to create what she calls disruptive change in Washington.

"I believe our politics itself is not the conduit for the energies we need to be expressing in order to move to the next phase of our history," said Williamson.

RELATED: Critical momentum up for grabs in Iowa for presidential hopefuls

From the 'Soapbox' to a forum on gun violence, the Iowa State Fair is front and center this week for Democrats running to take on Donald Trump.