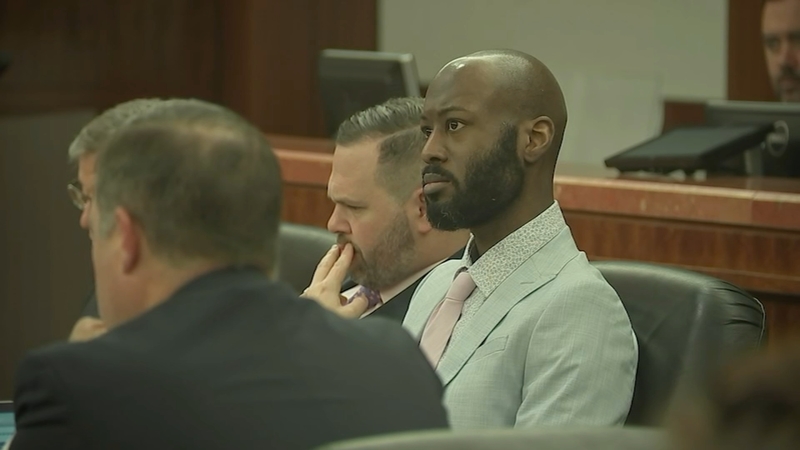 HOUSTON, Texas (KTRK) -- A judge has sentenced Andre Jackson, who was convicted of murdering 11-year-old Josue Flores in 2016, to life in prison.

Jackson testified during Wednesday's proceedings ahead of Judge Denise Collins' decision. He could have been given a minimum of just five years, but Judge Collins instead decided on the maximum term possible.

Before learning his sentence, Jackson, who was convicted just the day before, remained defiant of the guilty verdict from a jury of his peers.

"I worked very hard in my life. I will always have self-respect and defend my character," Jackson read from a lengthy, prepared statement.

In his presentation, he insisted that prison "is not where I belong," and that his DNA was not on the clothing worn on that day.

He then talked about Josue and the doubt of whether he was indeed the killer.

"I can't say much to Josue and his family. At this point, they have a guilty verdict. I'm not sure if they believe they have the right guy," Jackson said before invoking race. "This is about Black men in America."

He concluded with some self-awareness and continued defiance.

"I don't want to be inflammatory. I give my condolences to the family (but) people may fault me for not being remorseful," Jackson said.

Testimony from the sentencing phase

Jackson's demeanor Wednesday greatly differed from the day before when a jury read the guilty verdict for the Houston boy's 2016 stabbing. He smiled and was talking with his attorney remarkably more than he was seen at any other point in the past seven days of his trial. This was in contrast to the tearful breakdown he had Tuesday afternoon.

Jackson entered the courtroom. His demeanor is far different today than when we last saw him. Yesterday when the verdict came down he was sobbing. Today, he is smiling and talking with his attorney more than I’ve seen him speak in seven days.

Jackson decided to have Judge Collins sentence him as opposed to jurors.

The prosecution had Josue's father and sister take the stand and face Jackson during Wednesday's proceedings. Both explained the positive and negative impacts Josue's passing had on them.

Through a Spanish-language translator, Juan Flores explained the difficulty his family had trying to move forward, to the extent that they moved away from the neighborhood where Josue was killed so his other children didn't have to constantly be reminded of what happened.

Josue’s father said his life has been very difficult since his son’s death. He said he moved his family away from the neighborhood where Josue was killed so his other children didn’t have to constantly be reminded of what happened.

Josue's sister, Guadalupe, revealed he inspired her nursing career path from the start of his life.

"A lot was taken away from us as a family. We didn't get to say goodbye. I didn't get to give him a goodbye hug or kiss," Guadalupe said.

Josue’s sister Guadalupe said she became a nurse because of her brother. She said when he was born he woke up a nurturing side of her. “A lot was taken away from us as a family. We didn’t get to say good bye. I didn’t get to give him a goodbye hug or kiss.”

Heart wrenching of all, as she mentioned several times, was that Josue died alone.

The state's last witness was Josue's best friend, Angel Nario, who was likely the last person to see him alive. He recalled leaving school with Josue the day he was killed, later parting ways with a handshake and a hug.

"To this day, I have not had a best friend like Josue," Nario said, adding that both he and Josue should be graduating high school together this month.

Josue’s best friend was the state’s last witness. He is graduating from high school this month. Josue should be too. “To this day, I have not had a best friend like Josue.” He left school with Josue the day he was killed. He remembered giving him one last handshake and hug.

Then, Jackson's attorneys got their turn to call character witnesses, beginning with Jackson's stepfather who described his stepson as a role model to his siblings.

The stepfather also mentioned Jackson's accomplishment as a Marine, who was honorably discharged. Jackson had no disciplinary issues in school, but after the murder charges were previously dismissed in 2017, they called it a bump in the road.

Jackson’s step-father took the stand. He said he came into his life when he was 10-years-old. He described Jackson as a role model to their other children and said he was caring and loving. He reviewed Jackson’s accomplishments as a marine. He was honorably discharged.

His step-father said Jackson had no disciplinary issues in school. After Jackson’s charges were dropped in 2017, he said they called it a “bump in the road” and they discussed that “bad things happen to good people all the time.”

Jackson's younger brother was next to take the stand. He described the man who would be convicted of murder a father figure to him and his sibling.

Jackson’s younger brother took the stand on his behalf. He said they had a really close relationship and Jackson served as somewhat of a father figure for him and his sibling. He testified Jackson was doing well after charges were dismissed in 2017.

Defense lawyers moved on to Jackson's mother, who said her son, born during her U.S. Navy service, was a model student and top of the class. Still, Jackson had transitional issues when he left the military, his mom said, noticing behavioral changes including isolation and anti-social traits.

She said she wanted him to get help for anxiety and PTSD, but admitted she later lost touch with him after he moved away from her.

When she first learned her son was accused of the heinous act, she believed it to be a mistake.

She testified her son seemed to be having transitional issues after leaving the military. He lived with her for a period of time and said she noticed changes in his behavior. She said he wasn’t talkative, wouldn’t come out of his room and wasn’t eating. He then moved to Houston.

Michelle said she wanted him to get help for anxiety and PTSD. She admitted she lost touch with her son after he moved out. A friend is who alerted her he had been arrested in 2016. She thought, “This has to be a mistake.” He moved in with her after the charge was dismissed.

Just the day before, the Flores family sat in silence as the verdict was read by a jury that deliberated for less than three hours.

"We the jury, find the defendant, Andre Timothy Jackson, guilty of murder as charged in the indictment," said a member of the jury.

The Flores family waited six years for a guilty verdict.

During the trial, the defense team tried to convince the jury this was a botched investigation, but prosecutors said Jackson was seen running from the area after the murder. Josue's DNA was also found on Jackson's coat.

Prosecutors also told jurors the only way the boy's DNA could have been on his coat is if Jackson killed him.

Ever since the murder six years ago, a memorial on the north side demanded justice for Josue. ABC13 was told that with the guilty verdict, the demand has been met and the memorial will be dismantled.

The defense approached Judge Denise Collins saying one of their witnesses is only available on Zoom today or in-person tomorrow. The decision is being made on what to do. Judge Collins seemed frustrated. The courtroom is full with Josue’s family and activists.