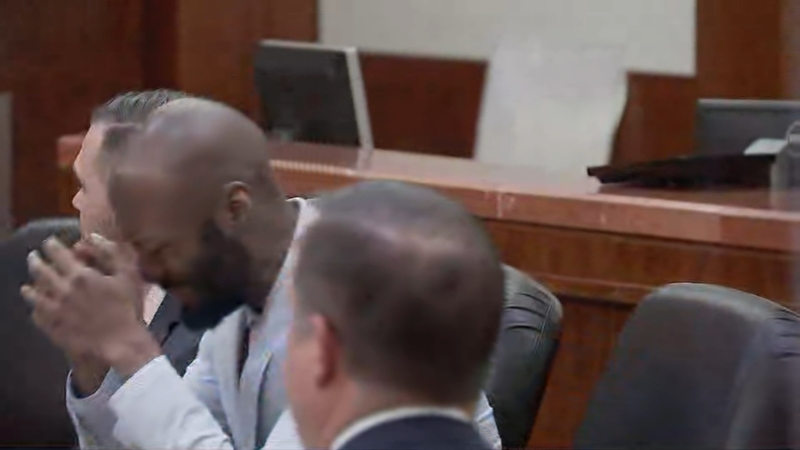 HOUSTON, Texas (KTRK) -- After a week of testimony and less than three hours of deliberations, a jury found Andre Jackson guilty of murder for the stabbing death of Josue Flores.

Andre Jackson was found GUILTY by jurors of murdering Josue Flores after 3 hours of deliberation. Jackson started sobbing before the jury ever read the verdict.

No outbursts from either family as the verdict was read, but there have been many tears. https://t.co/lA0oIblAyB

Josue, 11, was stabbed to death more than 20 times on May 17, 2016, on his way home from school. Jackson, who had steadfastly maintained his claim of innocence, broke down as the verdict was read in court Tuesday afternoon.

The case moves to the sentencing phase in which the judge could send Jackson to prison for anywhere from five years to life. This gets underway Wednesday afternoon, with Jackson's attorneys expected to bring in character witnesses from out of town.

The jury has returned to read the verdict. Jackson is sobbing.

Prior to the jury being brought in to hear closing arguments on Tuesday morning, the defense tried to have testimony thrown out from the representative from a Florida DNA lab who testified for the state. They argued that she was not licensed by the Texas Forensic Sciences Commission. The testimony included a key piece of evidence for the state: Josue's DNA on Jackson's jacket. Ultimately, the judge ruled that the defense could tell jurors they did not have to take that testimony into account if they did not believe the lab was accredited in the state.

The courtroom was completely silent as the attorneys gave their closing arguments.

Josue Flores' family now has closure six years after the 11-year-old was stabbed to death. Andre Jackson, the man on trial for the boy's murder, learned his fate with a visible outburst in court.

The state started around 9:45 a.m. Prosecutor Christopher Condon said there is no debate over what happened to Josue or where. The only question is who did it. He said with conviction that it was Jackson.

Condon acknowledged the inconsistencies in the citizen witnesses testimonies and said that proved they did not "get their stories straight" before testifying in court.

Monday in court, defense attorneys brought a witness to the stand to explain the possibility of "transfer DNA", meaning Jackson may have come into contact with the real assailant and they transferred Josue's DNA to his jacket.

During closing arguments, Condon said that only makes sense in a lab setting and not the real world.

He told jurors that context was important to DNA and Josue's was found on Jackson's jacket. Jackson was also seen in video headed the opposite way of the crime scene around the time it happened, while putting on a jacket.

Condon ended his 10 minute portion of the closing arguments by saying "Andre Jackson is a killer. He killed a child."

Defense attorney Justin Keiter took over around 9:55 a.m. and asked jurors to close their eyes and remember how they were leaning last night when they thought about the case. He said closing arguments should not change their opinions.

He showed a presentation that listed ways jurors may feel about Jackson, including not guilty, not sure if he was guilty or thought he was maybe or possibly guilty. Keiter told jurors that if they felt any of those ways then they have a reasonable doubt and could not find Jackson guilty.

Keiter said if they think a "marine combat veteran" is guilty, they owe it to him to go back and re-think it.

The defense attorney spent a good portion of his time discussing the investigation Houston police conducted into the crime. He called out specific detectives who testified in court and what they did not do that he believed they should have. He brought up that police did not get a court order to get ATM records from a gas station that Jackson had visited the morning of the murder.

He called it a "screw that guy" case, insinuating police cut corners because they assumed Jackson was guilty of murdering a child.

Houston police's investigation was said by the defense to have had "terrible, terrible tunnel vision."

He pointed out to jurors that crime scene investigators did not take swabs of Jackson's room at the Salvation Army and no one collected video from the facility showing May 17, 2016.

Once again, Keiter brought up the possibility that Jackson's roommate may have been the actual assailant. He was said to be convicted of robbery in 2019 and sent to prison.

The defense questioned where the surveillance video was that showed Jackson heading to the scene.

Keiter said that jurors had to assume that evidence collected during the investigation that was not presented to them during the trial was beneficial to Jackson.

He said you saw testimony from the citizen witnesses "mold" on important details.

"Terrifying," Keiter said. "You can't blame them, but you can't believe them."

Jackson's interview with police was brought up and Keiter said the detective baited him into answering his questions. He said that his client was not "phishing" for information, like the detective said he as in the recorded interview. Keiter said his client knew they did not have evidence proving that he committed the crime.

He told jurors that the state would try to persuade them with emotions, but emphasized on more than one occasion that emotions are not evidence.

Jurors were told by Keiter that they were Jackson's alibi and said the state was trying to "steam roll" him.

He posed the question to jurors, "What is different now in 2022 than what the state had in evidence in 2017?"

Citizen witnesses said that the attacker had Josue in a headlock. The state's DNA expert testified that friction is needed to pass a substantial amount of touch DNA from one person to the next. Godinich said he could not think of a situation where there would be more friction than stabbing someone in a headlock. He pointed out that none of Jackson's DNA was found on Josue's possessions.

Godinich pointed out that Jackson never washed his jacket before it was collected and yet still blood was not found on it.

He ended around 11:05 a.m. by saying that Jackson had no history of violence, he was attending school, did not fit the description given by citizen witnesses and only a small amount of Josue's DNA was found on his jacket. He told jurors that Jackson must have come in contact with the actual assailant.

The last attorney to speak before jurors were sent to deliberate was John Jordan, a prosecutor.

He started off by showing jurors the last photo of Josue ever taken. It was at his end of the year science fair party.

Jordan said when the defense is worried about evidence, they point to the police, and said that is what defense attorneys did.

Jurors and a packed courtroom were played the 911 call made by one of the citizen witnesses. The recording said the call came in at 16:43:01. Jordan showed the first surveillance clip they have of Jackson leaving the area of the scene that had a time stamp of 16:42:55 on it.

Jordan pointed out that Jackson was three blocks away from the scene, putting on a jacket in the summer in Houston and looking at his hands.

"Who looks at their hands?" Jordan asked jurors.

Jordan pointed out that the DNA expert defense attorneys brought in on day 6 of the trial had not done lab work before and did not have proof to support the claims he made.

He called the defense's attempt to pin the murder on Jackson's roommate "almost laughable" and said they were "grasping at straws."

Prosecutors played clips of Jackson's interview with the detective when he was arrested.

Jurors saw a clip of the detective asking Jackson why he was running from the scene. He asked the detective if he would run if he had just seen someone stabbed.

Jordan passionately said you would not run. You would stay at the scene like the witnesses did and render aid.

"If you had just seen someone die at your own hands you would run," Jordan said.

Keiter objected and called for a mistrial as Jordan made the impassioned speech to jurors but the judge overruled it.

"In his own words, he made the state's case," Jordan told jurors.

Several times during his closing argument, Keiter objected. He called for a mistrial at least twice. Each time was overruled by the judge.

Just before jurors were sent to deliberate, Jordan told them that Josue loved science and wanted to be a doctor. He told them it was very appropriate that they could use DNA and science in the jury room to convict his killer.

"It's him saying, 'It's me. I am here in this courtroom,'" Jordan told jurors about Josue's DNA found on Jackson's jacket.

Around 1 p.m. they asked for the evidence to be brought in to the jury room. About 45 minutes later, they asked for a computer so they could watch some of the video they were given. It is not clear what video, but they have access to Jackson's interview with police and the surveillance video. Just before 3 p.m., they announced they had reached their decision.