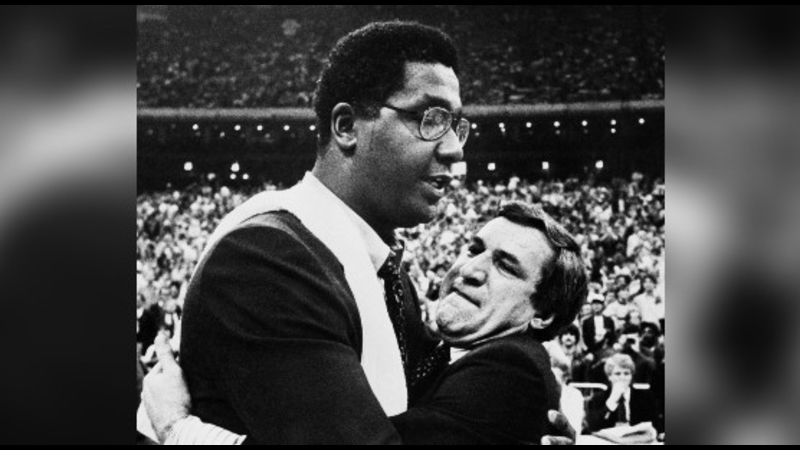 WASHINGTON -- Legendary basketball coach John Thompson Jr. has died at the age of 78, according to ESPN.

Thompson was the first African-American head coach to win the NCAA Men's Basketball Championship when his Georgetown Hoyas won the title in 1984.

Thompson led the Hoyas to three Final Fours in the 1980s.

He was also close friends with Dean Smith, the Hall of Fame coach of the North Carolina Tar Heels. Thompson was the first recipient of the Dean Smith Award which goes to a college basketball coach that embodies honesty, integrity and treating all people with courtesy and respect.

A message from Coach K on the passing of legendary Georgetown coach John Thompson Jr. pic.twitter.com/Nka2T39FL0

University of North Carolina-Chapel Hill Head Basketball Coach Roy Williams also released a statement, saying in part, "If you played for Big John you gained a lot as a basketball player, but you gained so much more as a man. It wasn't just about basketball; it was about education and contributing to the world. I could go on and on, but he was truly a great man who just happened to be a basketball coach, and a great one at that."

According to ESPN's Myron Medcalf, Thompson was still inspiring other Black leaders as recent as two weeks ago. He reportedly had a phone call with Black college basketball coaching urging them to seize the moment.

I was told that Big John, just two weeks ago, jumped onto a phone call with Black college basketball coaches and told them to seize the moment. The legendary coach was still fighting for change at the end.

At Georgetown, Thompson created one of the top basketball programs of the 1980s and 1990s, featuring the talents of Alonzo Mourning, Dikembe Mutombo, Patrick Ewing and Allen Iverson.
Report a correction or typo
Related topics:
sportscollege basketballncaaobituary
Copyright © 2022 KTRK-TV. All Rights Reserved.
TOP STORIES
Judge: COVID asylum restrictions must continue on border
IRS conducting criminal investigation in Uptown Houston
Woman stabbed to death allegedly by husband was a Katy ISD employee
Woman stopped at US border with condom-wrapped fentanyl
Northbound I-45 blocked before FM-518 in League City
Here's how many inches of rain you could get over the next 7 days
Investigations resume for parents of trans children, lawyers confirm
Show More
Houston gets highlighted as stop in the GMA 'Rise and Shine' tour
Wanted suspect shot and killed by Pasadena police during foot chase
Police arrest man charged in robbery and kidnapping caught on video
United cancels couple's flight, charges $4K more for same seats
Trump pays $110K fine, but must submit paperwork to end contempt
More TOP STORIES News