Trump not 'fit for office,' Putin tried to 'play him like a fiddle': John Bolton says during ABC News interview

ABC News sat down with Bolton for an exclusive interview
KTRK 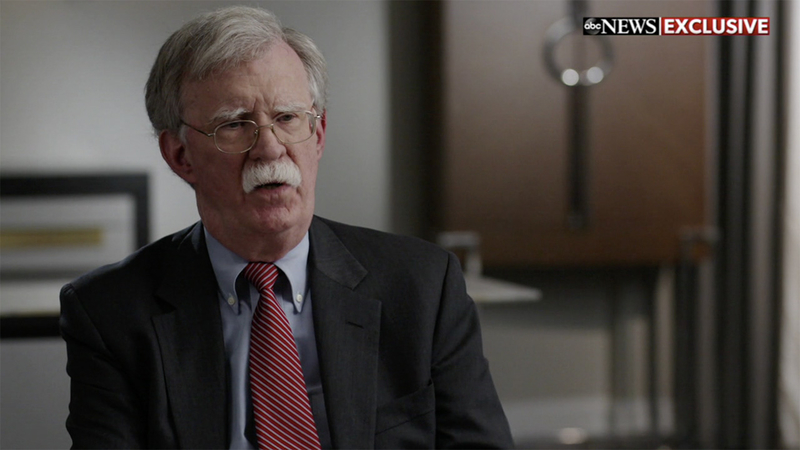 "I don't think he's fit for office. I don't think he has the competence to carry out the job ... there really wasn't any guiding principle that I was able to discern other than 'what's good for Donald Trump's reelection,'" Bolton said.

A scathing new book by Bolton accuses the president of being driven by political calculations when making national security decisions, including pleading with China to help his reelection prospects.

The White House worked furiously to block the book, asking a federal court for an emergency temporary restraining order Wednesday against its release. The 577-page book paints an unvarnished portrait of Trump and his administration, amounting to the most vivid, first-person account yet of how Trump conducts himself in office.

Former adviser John Bolton says in a new book that President Donald Trump was driven by political calculations when he made national security decisions.

Bolton, Trump's national security adviser for a 17-month period, said he believes Trump was so tuned into reelection that other concerns "fell by the wayside."

He pointed to Trump's 2019 photo opportunity with Kim Jong Un at the Korean Demilitarized Zone, saying the president focused on his public persona rather than what his meeting with the North Korean leader did for the bargaining position of the United States.


The book also alleges that Trump was eager to present Kim with a Trump-autographed copy of Elton John's "Rockman" CD.

Bolton also wrote that Trump solicited Chinese help for his reelection effort, which carried echoes of his attempt to get political help from Ukraine, leading to his impeachment.

This includes pleading with China's Xi Jinping during a 2019 summit to buy more agriculture products from the U.S., like soybeans and wheat, to help Trump's reelection chances.
Turning to Russia, Bolton wrote that its leader Vladimir Putin couldn't wait to get into a room with Trump.


The book, titled "The Room Where It Happened: A White House Memoir," is set to be released June 23 by Simon & Schuster. It has been the subject of a lengthy battle between Bolton and the White House.

He tweeted early Thursday that the book "is made up of lies & fake stories" by a "disgruntled boring fool who only wanted to go to war."

You can watch Martha Raddatz's exclusive interview with Bolton in a one-hour special Sunday, June 21, at 9|8 c on ABC.