Texans vs Steelers: Watt brothers play in NFL game together for 1st time 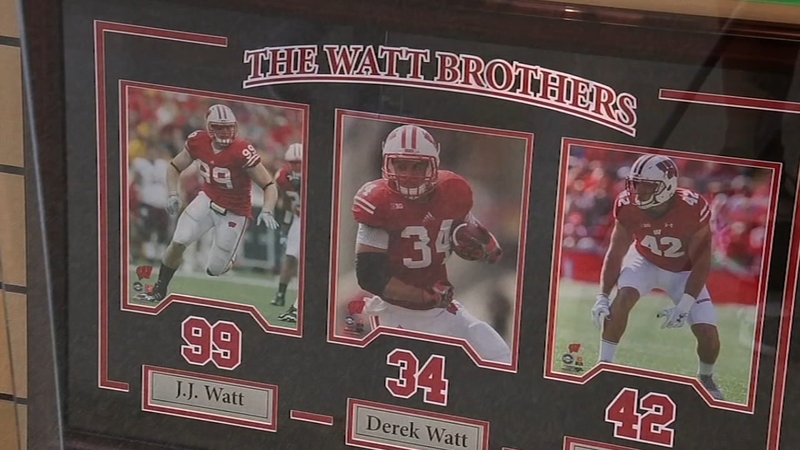 Watt brothers play in NFL game together for 1st time

HOUSTON, Texas (KTRK) -- In a lifetime filled with photos and accomplishments, Connie Watt wanted one more, and on Sunday, she'll get just that when her three sons play in an NFL game together for the first time.

"We've been waiting forever. I always used to tell the kids, 'In your offseason, can't you just bring your NFL uniforms home? I want a picture of all three of you.' And of course they look at you like, 'No. Mom, no!'" Connie told ABC13's Greg Bailey.

"It really doesn't get any better than that. It's incredible. It's special," JJ said during a press conference.

As the oldest by more than three years, JJ never got to play on the same team with his brothers growing up.

"Now that JJ gets to come into the picture with both of those guys, at the same time, it's really, really gonna be something special," Connie said.

The road to a remarkable reunion started in their hometown of Pewaukee, Wisconsin. With family, sports and discipline.

"If we wanted to accomplish our dreams and our goals we had to work extremely hard and make a lot of sacrifices. Which at the time we hated. But now we understand and we appreciate it," JJ recalled.

JJ is the three time defensive player of the year, his brother TJ is an All-Pro linebacker in Pittsburgh, and Derek is a do everything fullback - who gave a little extra to his big brother last year in Los Angeles.

"He's a pesky little fullback. He sticks his elbow in your ribs when you're pass rushing and then he goes on his way," the Texans star said of his brother Derek.

For all they've accomplished on the field, their parents take more pride in the family values that never changed.

"They've all pretty much stayed true to what they were as young folks. And as young adults, they've grown into what we would have expected them to be as kids growing up," said their dad John Watt.