The next steps for the Houston Texans and Jadaveon Clowney 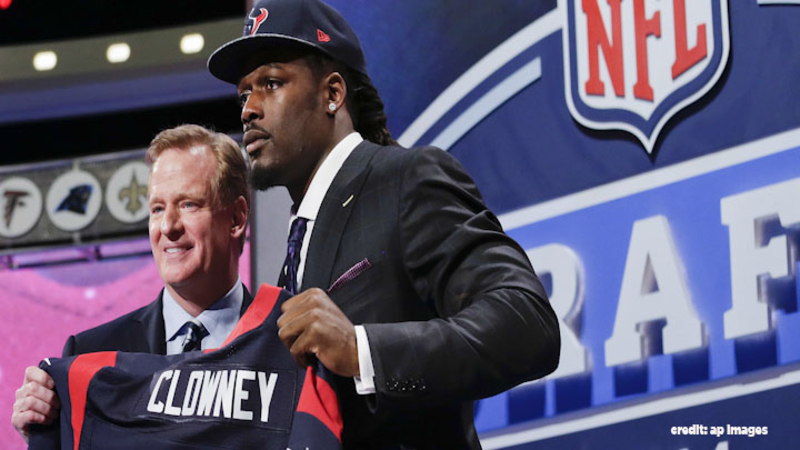 What can happen with the Texans and Jadaveon Clowney

HOUSTON, Texas -- The future of Texans defensive end Jadeveon Clowney could be settled before the start of the regular season, and his career might not continue in Houston.

With the Texans days from cutting their roster to 53 and less than two weeks from their season opener on Monday Night Football against the Saints, let's take a look at how this saga between Clowney and the Texans might end.

The Texans have their best chance to take advantage of beating the Andrew Luck-less Colts in the AFC South with Clowney in a Houston uniform. Although this might seem like the least likely possibility, it's the best-case scenario for Houston's chances to win this season.

After Luck retired on Saturday, the Colts' Super Bowl odds in 2019 took a nose dive. All of a sudden, the path to a division title cleared up for the Texans, even though they lost starting running back Lamar Miller to a torn ACL that night. Clowney has been a leader on defense the past three seasons, two of which were largely without J.J. Watt, and the Texans won the AFC South twice in that span. Although the Texans added a few noteworthy players during the offseason and enter the season without a general manager, this team is undoubtedly better with Clowney.

Clowney doesn't have the staggering sack totals of other elite pass-rushers -- he has 18.5 the past two seasons -- but he is one of the NFL's best at his position. After dealing with injuries early in his career, Clowney has become an elite run-stopper. He has three forced fumbles and five fumble recoveries the past two seasons, and his 53 tackles for loss the past three seasons rank third in the NFL.

Clowney also makes Watt better. Although Watt led Houston with 16 sacks last season, Clowney had the better pass-rush win rate, at 35%, according to NFL Next Gen Stats. Clowney ranked second in the NFL among all qualifying edge rushers, and Watt's 28% ranked 15th.

But Clowney's presence allowed Watt to take advantage of not being double-teamed as much. In 2018, Clowney was double-teamed 32% of the time, compared to Watt's 29%. While outside linebackers Whitney Mercilus and Brennan Scarlett could take some of the pressure off Watt, there's no player on the field who can replace Clowney's talent or production.

With Andrew Luck retired, the Texans are considered the favorites in the AFC South. Will that affect their plans concerning Jadeveon Clowney and his ongoing holdout?

Scenario No. 2: The Texans trade Clowney

What could they get for Clowney at this point?

The relationship between Clowney and the Texans -- particularly with coach Bill O'Brien -- might be beyond repair at this point, though winning usually helps fix things. By not resolving this situation before the July 15 franchise-tag deadline, the Texans limited what they will be able to get, but that might not stop them from dealing Clowney.

The Texans have received interest in Clowney from multiple teams. On Tuesday, ESPN's Cameron Wolfe reported that though the Dolphins are interested in a trade, they are unlikely to part with left tackle Laremy Tunsil, a player who would fill Houston's biggest hole. If Miami is the eventual landing spot for Clowney, Houston could look to acquire a veteran running back such as Kenyan Drake to replace Miller.

If the Texans let Clowney walk after the season, they would receive a compensatory pick in 2021, likely in the third round, which means if Houston trades Clowney for draft picks, it would have to be for a higher value than a third-rounder.

The Texans' weakest unit is their offensive line. If they do not acquire a starting-caliber lineman in return for Clowney, they would be making their defense significantly weaker while not shoring up their biggest problem area.

Clowney does have leverage in this situation because he cannot be traded until he signs his franchise tender. If he is not happy with the team the Texans want to trade him to, he could choose not to sign. Additionally, the team he's traded to can't sign him to a new deal until after the 2019 season.

Scenario No. 3: Clowney sits out

If Clowney doesn't report or refuses to sign his tender, the veteran could follow in the footsteps of Jets running back Le'Veon Bell, who sat out all of last season after his former team, the Steelers, placed the franchise tag on him.

As long as the Texans do not put the tag on Clowney for a second season, he would likely receive the contract he is hoping for from another team next offseason.

What if Clowney doesn't change teams in 2019? With scenarios Nos. 1 and 3, the Texans could choose to tag Clowney again (for almost $20 million per season) in 2020 and then trade him. If they make that trade before the franchise-tag deadline in July 2020, it would allow Clowney's new team to sign him to a long-term deal. Clowney would still have a lot of leverage in the situation because, as is the case right now, the Texans cannot trade him until he signs his tender.
Report a correction or typo
Related topics:
sportshoustonhouston texans
Copyright © 2022 ESPN Internet Ventures. All rights reserved.
TOP STORIES
Deputy hit while working accident during Jeep weekend, sheriff says
Alcohol and storms contributed to deadly crash in Asiatown, HPD says
At least 12 displaced after SW Houston apartment fire, HFD says
78,000 pounds of infant formula arrives in US
Man shot on apartment balcony; same apartment shot up earlier: HPD
Houston launches guaranteed income pilot program
'It was like a mad dash:' Clear Creek ISD senior set to graduate
Show More
Man dead after being shot during road rage incident, HCSO says
Biden pushes economic, security aims as he ends South Korea visit
Rain clearing, but still more to come this week
The Railroad Killer
Fate of 2,500 Ukrainian POWs from steel plant stirs concern
More TOP STORIES News