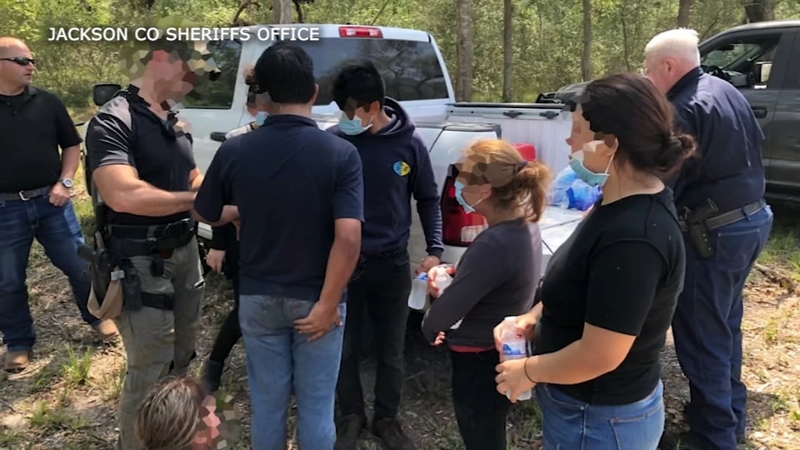 GANADO, Texas (KTRK) -- Between 70 and 100 migrants were found Friday morning in the back of a broken-down 18-wheeler on the side of Highway 59 in Jackson County.

A DPS trooper is who made the discovery. When he opened the back of the truck, officials say the migrants scattered into a nearby private ranch.


The Jackson County Sheriff said he was able to speak with one of the migrants who said they drove through the night and ended up breaking down here in Ganado Friday morning.

The migrants in the back of the truck were not given any food or water. We know how hot it is outside, so, inside the truck, conditions were considered horrendous.

On Friday afternoon, a school bus with migrants inside was seen leaving the private ranch where the migrants fled to, headed to the jail where they are being held until border patrol can transport them.

The sheriff did not know how long in total they had been on the truck.

You could only imagine the scene Friday morning around 7 a.m. when the DPS trooper opened the back of the broken-down truck and people came running out. A few, he says, were so dehydrated and overheated that they stayed with the truck and were treated.

At last count, 61 people were in custody and nine were taken to the hospital.


While they had more than a dozen agencies out here searching, the sheriff says the migrants were coming out on their own because the heat was getting to them.

"Hell, it's a mess. I don't know how else to put it," said Jefferson County Sheriff Kelly Janica. "Texas is in trouble. No one wants to help us. I don't want to get into the politics of it, but Texas is going to have to decide what it's going to do.

The sheriff acknowledged something like this has happened there before, but nothing of this scale.

As for search efforts, the active search wrapped up by early Friday evening. The sheriff says they are going to be stationed in the area waiting on others to come out. Additionally, they're asking for residents in the area to be on the lookout.

The situation near Ganado is reminiscent of a similar circumstance that happened not too far away 19 years ago this month, but with a historically deadly outcome.

In May 2003, 19 of 70 undocumented immigrants discovered trapped in a truck trailer near Victoria, Texas, died from dehydration, overheating, and suffocation in what is considered the deadliest smuggling incident in U.S. history.