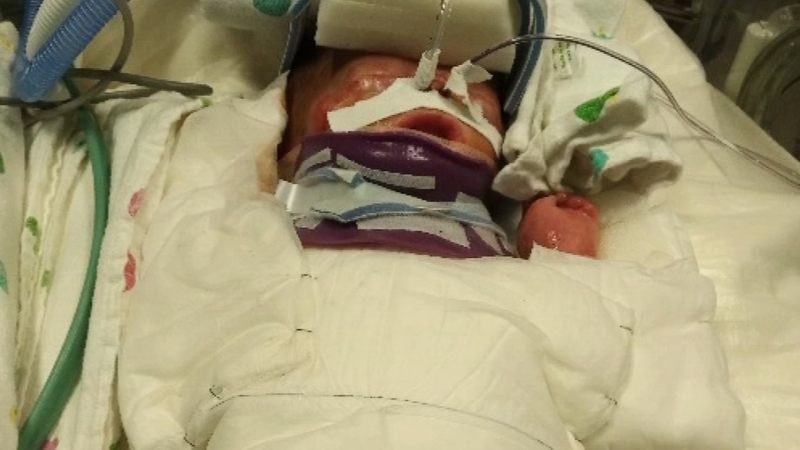 HOUSTON, Texas (KTRK) -- At five months old, Ja'bari Gray is steadily gaining weight, weaning off pain medications and is now recovering from his biggest surgery yet.

"The doctors in San Antonio, where he was born, didn't know how to treat him, and said he wouldn't make it," said his mother, Priscilla Gray.

For the past week, technicians in Boston have been using a biopsy from Ja'bari's skin to grow more of it.

The cells are isolated in trays, fed nutrients and spread.

"They grow and divide, making a very thin sheet of about four to eight cells thick, across the bottom of flask we grow them in," said Dr. Jon Hopper, chief medical officer at Vericel Corporation.

Surgeons grafted the replicated skin Friday, a big step towards his recovery.

"He was already starting to grow his own skin on his own, but there was still a lot of his body without it," said Priscilla. "Afterward, when the doctors said he made it through, it was such a relief."

The lack of skin made it impossible to regulate his body temperature.

"Now, he doesn't have to have heat in the incubator, and his heart rate is around 120 beats per minute," said Priscilla. "Before he got here, it was over 200."

Another step forward is that doctors were able to open his eyelids, which were a thin membrane.

It was the first time his parents were able to look their son in the eyes.

"It's like a happy moment because we never got to see his eyes from the day he was born," said Priscilla.

His parents have been with him every day, and he recognizes their voices and responds to them.

He can tell them apart from the sounds of the nurses and doctors.

As for the little boy's condition, what was once thought to be a rare skin disease is now turning into a deeper mystery.

Doctors at the Texas Children's Hospital say his original diagnosis in San Antonio was incorrect, and they are still working on further testing and may be naming it themselves.

"Whatever Ja'bari does have, it is a skin condition, we just don't know what it is," said Maldonado.

The family is still taking any donations as they live out of a Houston hotel room. You can help by following the link to their GoFundMe account.