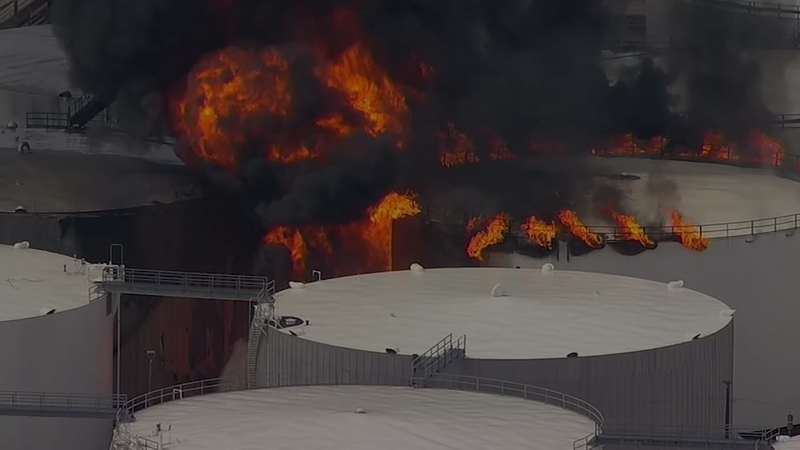 How the ITC fire has unfolded so far

DEER PARK, Texas (KTRK) -- More than two years after the massive ITC facility fire in Deer Park, which sent a large plume of smoke into the sky for days, the company has agreed to pay $900,000 to settle a lawsuit filed against them by Harris County.

According to Menefee, the lawsuit alleges ITC violated the county's development regulations and discharged pollutants into the county storm water system.

SEE MORE: What we know about the chemicals that burned in the tanks at the ITC plant in Deer Park
EMBED More News Videos

The Texas Attorney General's Office is pursuing an environmental enforcement case against ITC for unlawful air emissions and water discharges, but without the county's involvement, Menefee's office said.

While the county is being left out of the state level litigation, Menefee said they will still work to hold ITC accountable locally. Menefee expressed in a statement:

"The Harris County Attorney's Office will use any tools available to hold industry accountable at the local level. This is also a victory for taxpayers, almost $1,000,000 will be returned to the County. This is a sizeable settlement-one of the largest our office has achieved for this type of case. We will look at all angles to seek environmental justice and push these companies to follow proper preventative measures to avoid future disasters like this one. I also urge state legislators to revisit the law preventing Harris County from bringing environmental claims that affect its residents. Harris County should be allowed to pursue comprehensive actions against these polluters, and my office stands ready to do just that."

In a statement, ITC said it was pleased of working with Harris County to find an amicable resolution. Read ITC's full statement below:

"ITC appreciates the significant resources incurred by Harris County during the incident response. Thus, we are pleased to have been able to work cooperatively with the County to find an amicable resolution to resolve its claims."

It's been 22 months since the days-long inferno at the ITC facility and now, thanks to a $1 million grant, county leaders are working to improve the air quality for residents in that area.