Evicted dad from viral video near tears, but for a different reason 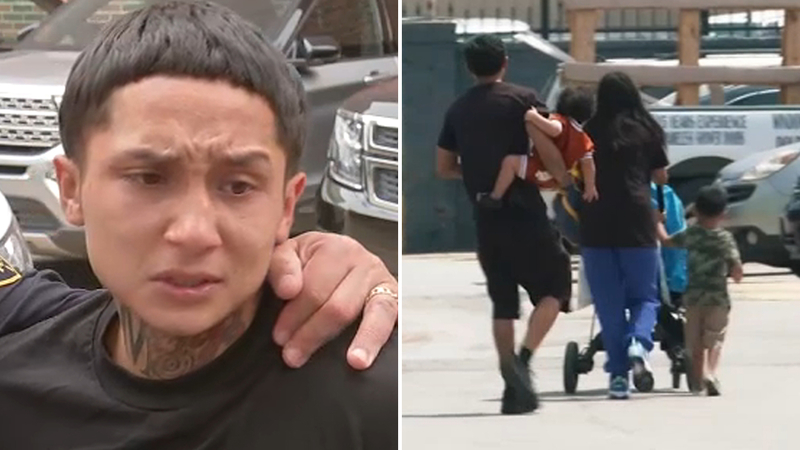 Dad says viral eviction 'was best thing to happen to me'

HOUSTON, Texas -- Israel Rodriguez, whose eviction story was front and center for all to see, was near tears Friday afternoon, but not entirely because of what news cameras captured.

With a Houston-area constable, whose job includes carrying out evictions, standing by his side, Rodriguez expressed gratitude to the response he and his family received to support him through his hardship.

Since then, he's raised $59,188 in total from GoFundMe accounts. One account was personally created by officers at Precinct 1 in order to help the family.

"I'm not the only one struggling," Rodriguez said during a news conference set up by Harris County Precinct 1 Constable Alan Rosen. "But it's the best thing to ever happen to me, to make a better change in life."

Since his story aired on CNN, Rodriguez explained that his family is getting help from all over the world, even thanking the constable whose office had a court order to serve the eviction papers.

"I'm learning to be a better person," Rodriguez added.

WATCH: See the moment deputies arrived to evict families in the Houston area, and hear their heartbreaking stories as they move their belongings out without prospects of where to go next.

He, his two small children, ages 20 months and 4 years old, and their mother were among the renters depicted in a story that aired Thursday about evictions and went viral shortly after.

For now, Rodriguez and his family are set up in a hotel and they're working to obtain more permanent housing, with support from Rosen's agency and other groups. Rodriguez also said he's gotten job offers, vowing to get to work once he finds his new home.

The CNN story put a face on the rental housing crisis being faced by 40 million Americans in the downward spiral of the COVID-19 economy.

Earlier this week, the Centers for Disease Control announced eviction bans, though, it wasn't effective in time to keep Rodriguez and others like him in their homes.

Thanks to the eviction bans, residents can't get kicked out of their homes for not paying rent if they can prove it's because of the COVID-19 pandemic.

Mayra Moreno breaks down the ins and outs of the eviction moratorium.

The eviction moratorium went into effect Friday, but there are strict requirements renters must meet to qualify.

"Rental assistance, I want Houstonians and people in Harris County to know, is still available. There is no longer a deadline to apply. We have decided we will leave the enrollment open. It will remain open until all funds have been expended," the mayor emphasized.
Regardless, the story of the Rodriguez family touched a lot of people.

"We ain't got nowhere to go," Rodriguez said outside of what was once his family's apartment, before he addressed media on Friday. "They didn't rush us, but they was like, 'Get everything you need."

Rodriguez admitted he hasn't been paying rent and is behind thousands of dollars.

This is crazy. Someone please help me find Israel Rodriguez and the elderly women in this video. Would love to help them get back on their feet. 🙏🏾 https://t.co/FfUz5oUwDC

"This is crazy," Watson wrote on Twitter. He's asking the public to help him find Rodriguez and the elderly woman evicted featured in CNN's story. Watson says he wants to help them.