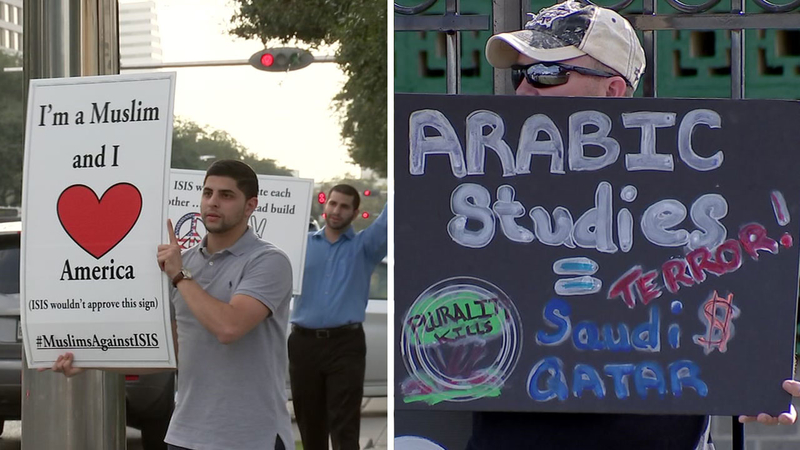 HOUSTON (KTRK) -- Drivers in the Galleria area passed by two men holding up signs with read "I'm Muslim, and I heart America. Meanwhile on the other side of town, protesters demonstrated against a school aimed at teaching Arabic to young kids. The two scenes captured a state of uneasiness, and an effort to stop the Muslim backlash.

"Shame, Shame. Shame," counter protester shouted at members of the Montgomery County Citizens Against Illegal Immigration that showed up Friday to protest against the Arabic Immersion Magnet School.

"Some of the funding is very questionable. The Qatar Foundation links to Saudi Money, and we just don't want that," said the groups founder Julia Appleton. "I understand dual languages. This is another ball game for that. This is not what that is."

This is the second time the group has protested outside of the school. The one thing different this time, a growing anti-Muslim sentiment around the country after the Paris and San Bernardino terror attacks.

"I think it's outrageous what they are doing. These are kids. They have a right to learn," said one counter protester. "I wanted to have a louder voice than they have."

In the Galleria area, two Muslim college students were scene holding up signs that stated they are against ISIS too, and they love America.

"We are just trying to change people's opinion. People have the wrong opinion of us," said Sammer Younes.

The demonstration is a sign of the growing need for some Muslims in Houston to counter the political anti-Muslim rhetoric.

"I think it's a good thing, but then I think, well why should they have to do that?" said the executive director of CAIR Houston.

HISD released a statement about the protest at the Arabic Immersion Magnet School: