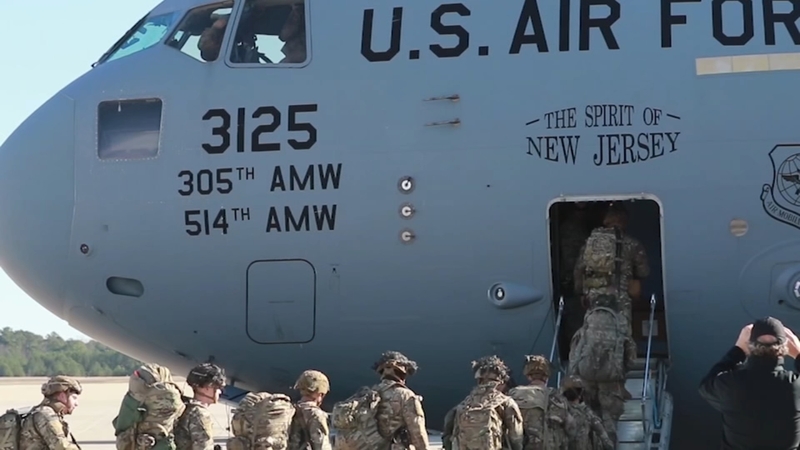 FORT BRAGG, N.C. -- An American embassy in Baghdad is closed due to unrest, while troops in Fort Bragg continue to line up for deployment at Pope Army Airfield to provide support.

The 750 soldiers comprised of mothers, fathers, sisters, brothers, and loved ones are answering the call from the commander-in-chief, to provide back-up as U.S. personnel and facilities deal with increased "threat levels."

Staci Yanta, a mother from Texas, says her son, Colton was supposed to be home for Christmas.

"We knew something was going to happen when he told us those plans changed," Yanta said.

Yanta's son was always adamant about joining the military and decided to enlist in December 2018, eventually being stationed at Fort Bragg in November 2019.

When Yanta heard the news on New Year's Eve morning, it was tough to process.

"I wanted to cry, like I'm about to right now, because that's my baby," Yanta added.

The mother of two says Colton had just recently gotten engaged. She's hoping the mission is a success and her son comes back unscathed.

"It is a major sacrifice that my child, along with a lot of other men and women are making for us to live in the country that we live in," Yanta said.

Along with Colton and the other 750 troops being sent to Kuwait, the Department of Defense says additional soldiers from the Immediate Response Force will be ready for deployment over the next several days.

Yanta, along with other families in Cumberland County, are asking for prayers and support.

"Please pray for the safety of all of those young people, because they're doing an amazing thing for our freedom," Yanta added.