Inmate: Deputies choked me for smiling in mugshot 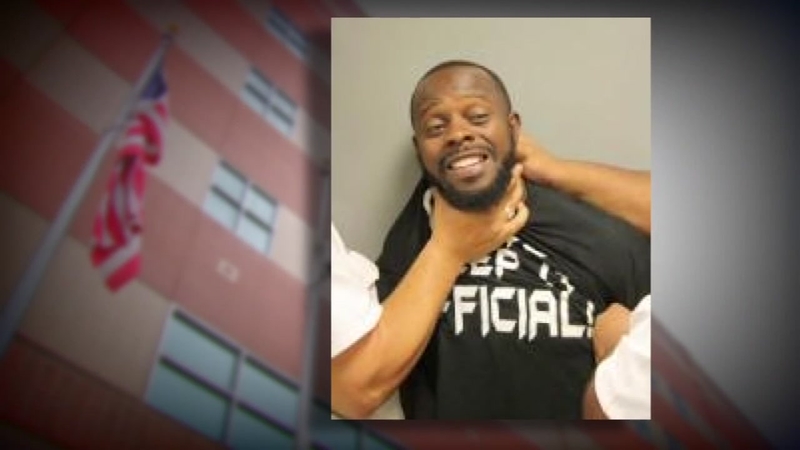 Inmate claims he was choked by deputies

HARRIS COUNTY, TX (KTRK) -- A Harris County jail inmate claims he was assaulted by deputies because he smiled for his mugshot.

Christopher Johnson is suing after he says two county employees put their hands around his neck and choked him for about 30 seconds.

Johnson was arrested July 25, 2015 on suspicion of drunk driving. His attorney says at the time of booking, Johnson was berated and ridiculed for smiling in his mugshot.

"He was choked, in front of a room full of people, for smiling. That's very humiliating," said attorney Andre Evans, who is representing Johnson in a civil rights lawsuit filed in Federal Court.

"This is how I always take my pictures," Johnson stated in the lawsuit.

That is when Johnson says a second deputy with gloves entered the equation. The deputies allegedly began to choke Johnson by placing their hand around his neck.

The Harris County Sheriff's Department says in general, jailers often have to hold up heads of uncooperative defendants. It also points out that plenty of people have smiled or made other faces while getting booked. The department released the following statement:

"The Harris County Sheriff's Office believes that proper procedure was followed during the course of Mr. Johnson's booking. Should any evidence arise to the contrary, proper administrative actions will be taken. At this time, evidence suggests that Mr. Johnson's pleading does not hold merit."

"What took place at the Harris County jail that night was a clear violation of my client's first amendment free speech rights as well as a childish show of excessive force," said Evans.

Johnson is seeking both compensation and punitive damages, alleging the deputy and those involved in the incident violated his civil rights. However, well-known local attorney Dan Cogdell, who is not involved in this case, says even if the allegations are true, they will be difficult to prove in court.

"Even if it's true, I wouldn't be calling Ferrari of Houston this afternoon to order me a yellow one based on the expectation of a huge verdict in this type of case, because they're very, very difficult cases to prove," said Cogdell.

Johnson has been arrested several times before. And his other mug shots all appear to be pretty uneventful. But whether this mug shot is one that violated his civil rights will be eventually up to a jury to decide.
Related topics:
harris countyassaultjailcivil rights
Copyright © 2022 KTRK-TV. All Rights Reserved.
TOP STORIES
Harris Co. judge accused of unlawfully arresting former TV journalist
Big rig lands nose-first into construction hole in west Houston
Burn ban in effect for unincorporated parts of Harris County
HPD responds to reports of threat at Ben Taub hospital, police say
Gulf disturbance up to a 40% chance of development
81-year-old missing for nearly week in need of medication, family says
50 migrants die after 18-wheeler abandoned in Texas heat
Show More
A glance at migrant smuggling deaths globally since 2000
Abortions before 6 weeks allowed to resume in Texas after court order
The Alley Theatre to be renamed after receiving anonymous $25M grant
Major crash blocks all lanes of SH 35, south of FM 518 in Pearland
Advocates believe migrants dead in 18-wheeler were headed to Houston
More TOP STORIES News