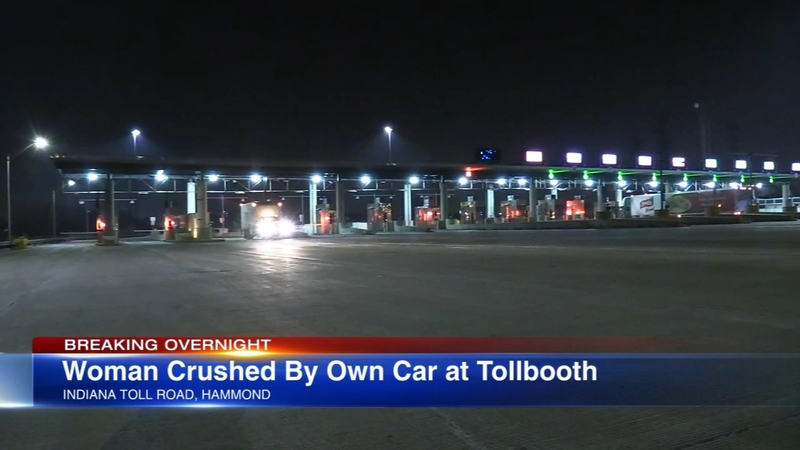 Woman fighting for life after being pinned to Indiana toll booth by own car, police say

OAK LAWN, Illinois -- A woman is fighting for her life after being pinned against an Indiana toll booth by her own car Saturday night.

The incident happened about 9:20 p.m. Saturday at the last Indiana toll plaza before the Chicago Skyway, about a mile east of the state line, Indiana State Police confirmed. The 40-year-old woman, who is from Otsego, Michigan, was paying her toll at a booth in the westbound lanes when something happened that caused her silver Buick SUV to crush her against the tollbox, police said.

A witness told Indiana State Police that the woman had taken a long time to pay her toll. The witness saw the woman open her door to retrieve something that had fallen on the ground, putting her leg out between the car and the toll booth, police said. The fallen item was later identified as the woman's debit card, police said. While the woman continued looking toward the ground, the Buick lurched forward and wedged the woman between her open car door and the toll booth.

The witness pushed the help button at the toll gate and tried opening the passenger-side door, but it was locked, police said. At that time the woman was still conscious and speaking, but her car moved forward two more times, wedging her further into the box.

The witness and another man were able to get the passenger window down and shift the Buick into park shortly before Indiana state trooper Ala'a Hamed and a toll attendant arrived, police said.

When Hamed arrived on the scene, the woman had become unconscious and did not have a pulse, police said. Hamed instructed the toll attendant and another person on the scene to hold onto the woman as he attempted to move her car, ultimately freeing her.

Hamed used an Automated External Defibrillator on the woman, which advised that it could not locate a pulse and instructed the officer to begin CPR, police said. The AED resuscitated the woman twice before she was taken to Franciscan Health Hospital in Hammond, Indiana, for treatment.