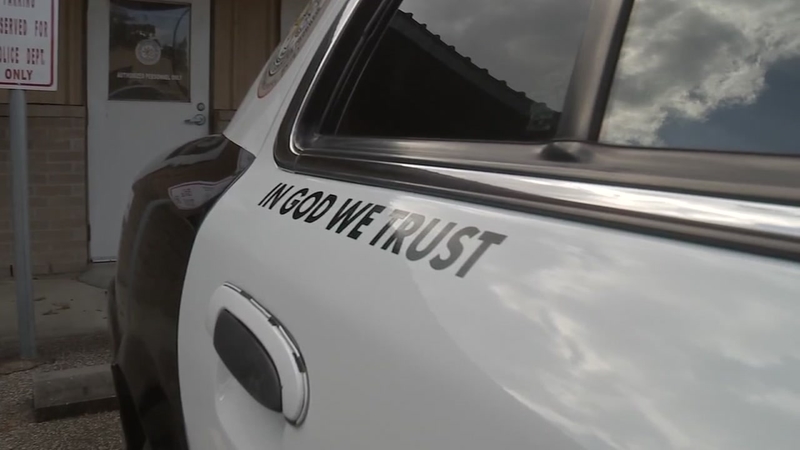 CLEVELAND, TX (KTRK) -- Following in the footsteps of Katy, Cleveland ISD has decided to add "In God we trust" decals to its fleet. To their surprise, they received a lot of support.

"When I went to them with this idea and the A.G.'s opinion (I) pulled out my card to pay for it," said Chief Rex Evans with the Cleveland ISD Police Department.

It was a donation the chief did not expect.

"(They said) your money is no good here," said the chief.

Free decals for his entire fleet with the phrase "In God we trust."

"I think it's important to bring it back, especially with the events going on today," said Mike Mize with Good Promotions.

Chief Evans said he was happy to follow in the city of Katy's footsteps even though they received some negative feedback.

"I don't feel that it represents the entire population of the community," said Emily Elders, Katy resident.

Katy was the second city in the state to do so after the Texas A.G. released his opinion on the issue.

"Certainly not trying to push it on anyone but we have the equal right to say it," said the chief.

A close call for Chief Evans changed his take on everything.

"It was a shots fired call man with a gun," he recalled.

However, after more than two decades in law enforcement, the four words have a deeper meaning at least for him.

"If people choose to take it in a religious tone, whether for or against, then they have that right in this country," said the chief.

Cleveland ISD is the first law enforcement agency in Liberty County to display the decals on its patrol units but more agencies in the county are following suit including the Liberty Co. Sheriff's Office.

Related topics:
religion & spirituality
Copyright © 2021 KTRK-TV. All Rights Reserved.
RELATED
Katy puts 'In God We Trust' stickers on 32 city vehicles
TOP STORIES
Arrest made in case of Alvin abduction, sexual assault of a minor
20-year-old shot to death during break-in of Conroe home, police say
Man accused of dismembering mom's body after murder appears in court
Houston Astros on pace for record beer year
Astros Game 6 guide: Closures around Minute Maid Park back on tonight
Cleveland man indicted in connection with U.S. Capitol attack
The University of St. Thomas offers low-cost counseling services
Show More
JJ Watt on Texans: 'It hurts me to see where' fan base is now
More truck drivers needed to assist with US' supply chain shortage
Don't get stuck in these traffic closures this weekend
Warrant: Baldwin didn't know weapon contained live round
Prop guns: What they are and how they can kill
More TOP STORIES News