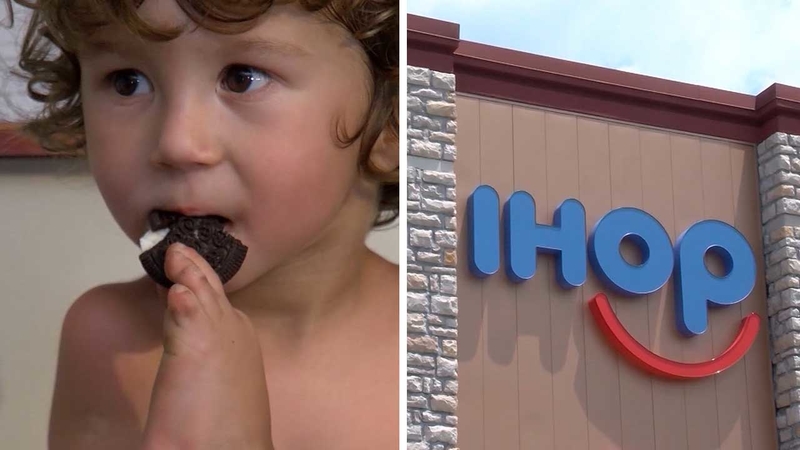 HOT SPRINGS, Ark. -- When William, 3, sits down to eat a meal, he sits on a table and eats with his feet because he was born without arms.

His mother, Alexis Bancroft, said that's not usually a problem, but during a visit to an Arkansas IHOP on Saturday, it was, KARK reports.

She took William to the restroom to wash his feet before they started to eat, but a manager told them that the toddler wouldn't be allowed to sit on the table or to touch the syrup containers with his feet due to health department concerns.

"I asked her, I'm like, 'Do you ask all your customers if they wash their hands before they touch them?" Bancroft said.

The family got up and left the restaurant without paying for their drinks. Bancroft posted about the incident on Facebook, expressing her anger toward the restaurant and saying it was the first time William had been discriminated against in this way.

"He is a three year old innocent child that does things different," she wrote in a since-deleted Facebook post.

The post got so much attention that the manager saw it. She reached out to Bancroft in a message, saying, "I really think this was all a misunderstanding. I would never do that to your son intentionally or otherwise. That's not what I was trying to do."

Sources told KARK that the manager is on leave.

IHOP also issued a statement, apologizing and saying it would retrain its team.

"IHOP and our franchisees do not tolerate actions that are or allude to discrimination of any type. The franchisee at this location has been in touch with the guest to express his sincerest apologies and will continue to be in communication with her to resolve the issue. Additionally, the franchise will also retrain his team members to ensure IHOP's level of service, particularly regarding guests with disabilities, is provided to all. For 60 years, IHOP and our franchisees have strived to create a warm and hospitable dining experience for all guests, and this incident is not reflective of that ongoing commitment."

Bancroft said that the incident temporarily affected the way William wanted to eat.

"The very next day, he didn't want to sit on the table to eat. He wanted to sit in a chair," she said.

William went back to eating normally after a few days, she said, but the incident also affected her.