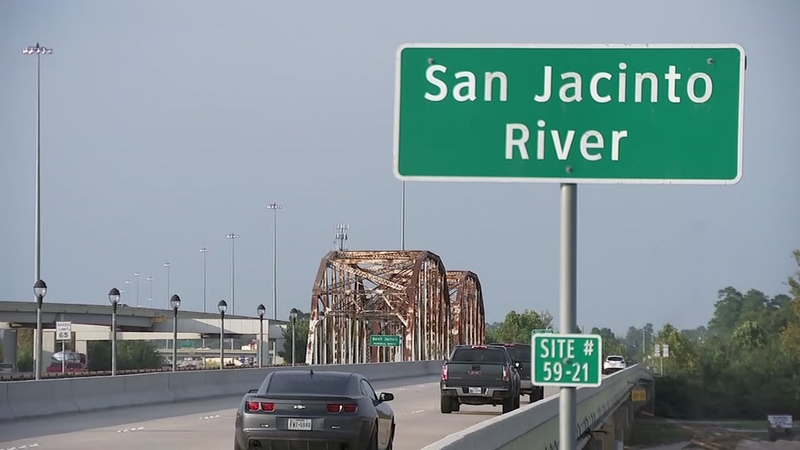 Rather, they claim their homes flooded after the river authority opened floodgates at Lake Conroe.

"We believe there might be ways for them to get proper compensation based on an inverse condemnation case, which is basically saying the state acted in a manner that they took their property and now the state has to compensate them for their property," explained attorney Paul Danziger.

In the heart of Kingwood, very few businesses are open and piles of debris are growing higher and higher.

The frustrations are also growing, too.
SkyDrone13 was above a Kingwood neighborhood this afternoon, where we saw dozens and dozens of families working to rebuild.

We've been hearing a lot of different numbers from local and even federal officials on just how much damage there has been after Harvey.

Some estimate more than 300 businesses and as many as 5,000 homes are destroyed here. That's more than 10 percent of all homes in Kingwood.

It's important to remember that many of these areas flooded when officials opened the floodgates at Lake Conroe.

So many people who thought they would be fine when the storm first hit were shocked to find themselves under several feet of water.
Now they're learning just how slow recovery can be.

In Kingwood, more than 10 percent of the homes are said to have been destroyed during Harvey.

"You can't expect businesses to come back when they lost everything to maybe have this happen a year from now," Martin said. "That's why we need an investigation first of all on the Lake Conroe Dam and the San Jacinto River Authority."

The San Jacinto River Authority gave us this lengthy response after statements made by Martin and other Kingwood officials:

A number of statements were made in a recent press briefing in Kingwood that are false and misleading. Since the press briefing, SJRA employees have been receiving angry calls and emails and even death threats. The misinformation provided in that briefing is sadly misleading residents into believing that SJRA somehow caused their harm when, in fact, the Lake Conroe dam actually REDUCED the severity of their flooding. The purpose of this response is to correct those statements and provide accurate information.

Even though water supply reservoirs like Lake Conroe are not designed for flood control purposes, they actually provide some mitigation of downstream flooding. The following clip is from one of the many news briefings held by the Harris County Flood Control District. In this clip, their spokesperson clearly explains two key points: (i) that Lake Conroe actually reduces downstream flooding, and (ii) that water from Lake Conroe is a small fraction of the water that flows into Lake Houston.

The bottom line is this:
1. Lake Conroe reduced the flooding around Lake Houston by reducing the peak flow going through Lake Conroe and into the West Fork of the San Jacinto River from 130,000 cfs to 79,000 cfs. That is approximately a 50,000 cfs reduction in the peak flows going down the river to Lake Houston.

2. Water from Lake Conroe makes up only about 10 to 20 percent of the flows that reach Lake Houston. The vast majority of the flows are from other watersheds (that don't have gated structures to reduce the peak flows).

The following are several misrepresentations or misstatements made during the recent press briefing:
1. Zero homes flooded in The Woodlands. SJRA protects The Woodlands and its other "friends" from flooding at the expense of Kingwood and other areas to the south.

a. First, somewhere between 200 and 500 homes flooded in The Woodlands.
b. Second, The Woodlands is not downstream from Lake Conroe. It's in an entirely different watershed - Spring Creek. The only area of The Woodlands affected by Lake Conroe releases
is Harper's Landing on the east side of I-45. The Woodlands experienced extensive flooding due to the heavy rainfalls in the Spring Creek watershed, and some homes in Harper's Landing also had flooding.
c. The statement that SJRA attempts to protect certain people from flooding at the expense of others is both false and offensive. Even if it were physically possible to control where flooding occurs, to suggest that we would somehow choose who would be "allowed" to flood by how we operate the spillway gates is preposterous and despicable.

2. The Coastal Water Authority pre-released water from Lake Houston through its gates and reduced the flooding that would otherwise have occurred. SJRA should have done the same and this would have prevented a significant amount of damages in the Kingwood area.

a. Neither statement is true. First, the total amount of water released from Lake Houston was around six inches over a three-day period and resulted in less than 5,000 acre-feet of total volume being removed from the reservoir. The volume of water which passed through Lake Houston at its peak elevation during Harvey was almost 800,000 acre feet, so the impact of the pre-release was less than 0.6%. The resulting flood elevation difference around Lake Houston was imperceptible.

b. If pre-releases had been made from Lake Conroe, the maximum release rate that will not create flood conditions downstream will allow approximately 5,000 acre feet to be released each day. The normal travel time to Lake Houston is over 24 hours, so within three days, Lake Conroe's pre-release would have totally replaced and actually tripled the volume pre-released from Lake Houston, with the result of raising the reservoir back to its original level and perhaps beyond.
c. Worse, if SJRA had pre-released into the West Fork of the San Jacinto River, this would artificially pre-fill the river and Lake Houston. Then when rainfall from Harvey hit all the surrounding tributaries that flow into the West Fork, it would have consequently increased the timing and magnitude of the early flooding, making evacuations, protection of lives, and high-water rescues from low-lying homes evemore difficult for emergency responders.
d. Pre-release is a "fools-gold" solution to riverine flooding. While pre-releasing from Lake Houston may not generally cause any problems to the properties downstream of the Lake Houston dam, this is not necessarily true for other reservoirs, especially Lake Conroe. The risks and problems related to pre-release far outweigh its occasional and very limited benefits. The TCEQ recognizes this fact and does not recommend pre-release for Lake Conroe (see TCEQ pre-release letter).

3. When Lake Conroe opened its flood gates, a surge of water rushed down the river and completely destroyed all structures in its path, including multiple homes in Kingwood near the river. The water in Lake Houston rose over four feet in less than five hours.

a. This is absolutely false and shows a lack of knowledge of how floodwater actually flows on the West Fork of the San Jacinto River and how the Lake Conroe spillway gates are operated. This river is located in the coastal plains of Texas and does not have significant topographic relief that can create waves of rushing water and generally does not have very rapidly rising flood waters. There is no question that the flows from this event were unprecedented and were highly damaging. Yes, homes were destroyed by the powerful force of the high flows in the river. However, Lake Conroe actually reduces the flows in the river and only 20% of the water flowing into Lake Houston originated from the Lake Conroe watershed. In addition, it takes over 24 hours for water released from Lake Conroe to reach Lake Houston. The water in Lake Houston rose steadily at a rate of approximately seven inches every four hours as officially recorded by USGS gauges during the peak of the storm, not four feet. To imply that Lake Conroe opened its flood gates and then homes were destroyed in the roaring floodwaters is incorrect.

Page 3 of 3
b. The flood release gates on Lake Conroe are opened in a measured and careful order under a prescribed procedure developed by dam-safety engineers and designed to protect the structural integrity of the dam while keeping releases below the peak inflows. Spillway gates are opened incrementally and gradually based on numerous variables, including primarily inflows and lake level.
c. The peak flow release rate from Lake Conroe was approximately 79,000 cfs and was not reached until the reservoir was nearing its highest recorded elevation of 206.2' MSL with inflows into the reservoir of approximately 130,000 cfs. The peak release rate from Lake Conroe was about 20% of the peak flow rate into Lake Houston of 400,000 cfs. The peak inflow rate into Lake Conroe was around 130,000 cfs so the reservoir provided significant reductions to the flood conditions that would have occurred without the presence of Lake Conroe to absorb and buffer the flows by increasing the storage within the reservoir.

4. The SJRA does not notify or warn anyone when making releases and has no care or regard for the safety of the residents below the dam when they open the flood gates.

a. SJRA partners with numerous emergency response agencies in both Montgomery and Harris counties during all major storm events as to the conditions at Lake Conroe and the potential releases that may be necessary. SJRA has no ability to order or control evacuations or to serve as the emergency responders for people in harm's way who live or travel within the floodplain or use flooded highways. SJRA's responsibility is to safely operate the dam and the spillway release gates. However, SJRA is in frequent contact with emergency response agencies in the region during any significant storm event and provides them with information about releases based on the amount of rainfall being monitored in the watershed.
b. SJRA maintains a completely transparent public website showing the actual releases from the dam that are underway, as well as the lake level and rainfall rates that are occurring in the watershed at all times. The website is immediately updated as changes are made to the gate openings. The data from SJRA's meteorological monitoring stations around the watershed are updated via satellite communications at 15 minute intervals and can be viewed by the public at all times during storm events.
c. SJRA and county emergency officials meet regularly to prepare for storm events and discuss ways to improve their collective performance in accomplishing their respective responsibilities. SJRA is currently expanding the number of the meteorological monitoring stations and is upgrading the technology used by the stations to enable partners in both Montgomery and Harris counties to efficiently link into the SJRA network and share or expand these flood early warning resources.