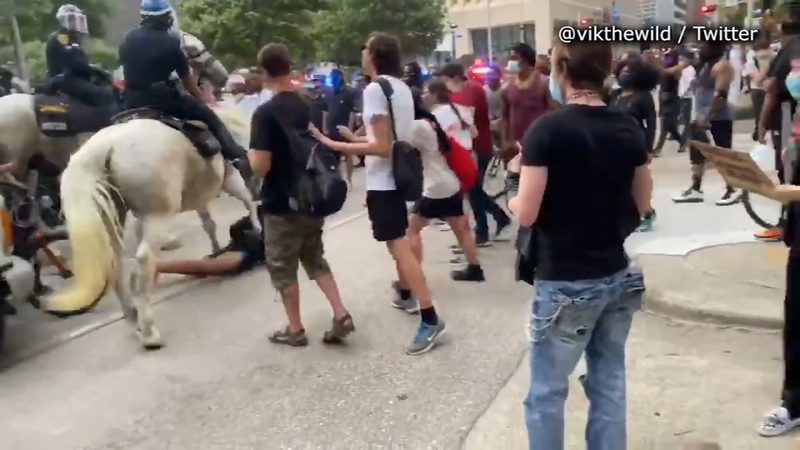 HOUSTON, Texas (KTRK) -- A woman is suing the police department and the city of Houston after she was trampled by a city police officer mounted on a horse during of a protest for George Floyd in 2020.

The lawsuit regarding the incident was filed on Jan. 15, 2021, by Melissa Sanchez, who is seeking $1 million in relief. According to court records, Sanchez was among the protesters in the 1300 block of Travis Street on May 29, 2020.

Video of the incident shows Sanchez in a black backpack, near the front of a police van, holding a sign. Documents state the officer approached Sanchez from behind, without warning, and charged into her. Following the incident, officers on the scene were said to not have helped Sanchez get medical help.

Due to the incident, Sanchez suffered severe pain, mental anguish, emotional distress, and personal injuries, documents state. The officer is accused of negligence, malicious or reckless conduct, and failure to properly use HPD's tangible property.

Following the incident, video of it began circulating and it caught the attention of Mayor Sylvester Turner and Houston Police Chief Art Acevedo.

"Our job is to protect them and their rights to do that. And for them to do it safely," Turner said of the video. "It's not our intent to try to injure anyone. And so I certainly want to apologize to her for that, hope that she (is) doing well. We are constantly reviewing our procedures to make sure that we protect them while they're doing their things peacefully."

"What happened with mounted patrol should not have happened and for that please accept my apology," Turner tweeted.

Melissa (@SVRFR_), you have the right to march, demonstrate and protest peacefully.

A part of our job is to enable you to do just that safely. What happened with mounted patrol should not have happened and for that please accept my apology. st (1/2)https://t.co/Plj3YwONx9

"We are taking a look on how we can better deploy our resources to keep that from happening again so you or anyone else can exercise your Constitutional right and we can maintain the peace," Turner said.

We are taking a look on how we can better deploy our resources to keep that from happening again so you or anyone else can exercise your Constitutional right and we can maintain the peace.

I hope you are ok.

Acevedo also commented on the video in a news briefing.

"You can characterize (it) any way you want. I've actually seen the video," said Acevedo. "But as I look at it, officers are taking rocks. I would ask the public to look at where that mounted officer, where his gaze is. He's looking right at what ahead. And then, that young lady is walking backwards. I don't think she ever saw the horse coming either, so it appears that might have been unintentional."

At the time, Acevedo said the police department was reviewing the video, along with video from body cameras worn by other officers.

Houston Mayor apologizes to protester trampled by officer on horse