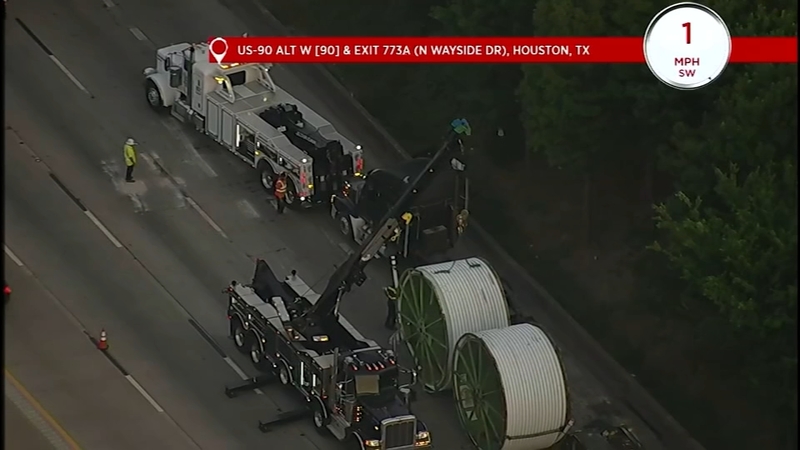 HOUSTON, Texas (KTRK) -- I-10 East Freeway westbound at Wayside has reopened after a big rig hit the railroad bridge over the freeway on Tuesday night.

The crash was reported at 8:02 p.m. The Houston Police Department confirmed to ABC13 that the big rig hit the bridge, but did not provide other details.

SkyEye launched Wednesday morning to give a view of the scene that showed two large spools sitting on the road.

"Our contractor actually went out and closed several lanes, westbound lanes at I-10 westbound," said Deidrea George with the Texas Department of Transportation. "And so that we can also assess damage to our facility and also allow Union Pacific to assess the damage to their facility."

More than 12 hours later, the spools were finally removed and the freeway reopened.

"A semitrailer truck became wedged under a railroad bridge over Interstate 10 in Houston on Tuesday. The incident happened at about 8:30 p.m. The semitrailer truck was successfully removed at about 4:30 a.m. on Wednesday. The bridge was inspected by Union Pacific engineers, who determined that it was safe for railroad traffic to resume."


HPD said the truck driver was issued a citation for excessive height of load.

The Houston Avenue bridge is among the ones hit the most often.

Back in February, an oversized load, again involving a spool, got stuck under the bridge over the Katy Freeway.

In the latter half of 2018 alone, drivers had to dodge five loose spools on Houston highways.

Watch Eyewitness News at 5 and 6:30 p.m. for updates on what we learn about this latest incident.