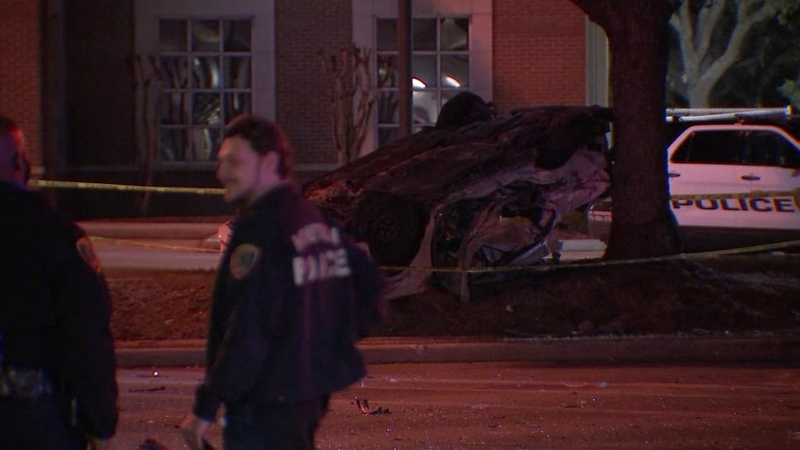 According to officials, the only person who survived the crash is the man accused of causing it.

Houston police told ABC13 at the scene that a man driving a Silverado pickup truck was speeding and blew past the red light on the Highway 290 feeder road near Hollister and slammed into a sedan, who had the right of way.

"Everybody came together. And we don't have that in the world. So when you got that right there you just, you can't just go home. You can't just go to sleep. I knew him right then, but I wanted to know who he was," Tyrque said.

The driver of the sedan, who family members identified as 25-year-old Adam Phillips, died at the scene.

The only survivor of the crash is the man accused of causing it and he also admitted to running the light, police say.

His mother, Sherry Philips, told ABC13 he was a chef at the Daily Gather restaurant in CityCentre. She said Adam had just left work and called his girlfriend to say he'd be home soon. When he didn't show up by midnight, his girlfriend went out searching. She even passed the wreck during her search, but she didn't see Adam's car.

His mom said she got a knock on her door at 3 a.m. from police, saying her son had been killed.

Police said the passenger in the pickup truck, a 23-year-old mother with a new baby, was transported to the hospital, where she later died. She was ejected during the crash.

Her husband was the one driving the truck, officials said.

The driver accused of running the red light was hospitalized, but with non-life-threatening injuries. Authorities said he showed no signs of intoxication.

Officials also said that the man admitted to running the red light.

The case is being referred to the Harris County District Attorney's Office to determine if any charges will be filed.

Sherry told ABC13's Courtney Fischer that she's very grateful Tyrque was there for her son and the woman killed. She said she would like to meet him, and Courtney put the two in contact.