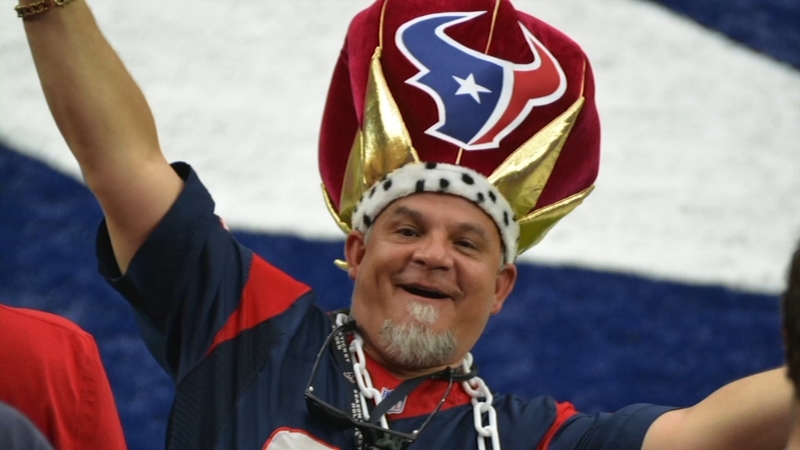 HOUSTON, Texas (KTRK) -- Texans royalty might be missing this season after the passing of the iconic fan known as the "End Zone King."

David Nagy was known for his elaborate crown and custom costume at each game, as well as the RV he used to tailgate.

His son, also known as David, remembers what it was like when fans saw his dad arrive at NRG Stadium.

"Everybody was cheering," Nagy recalled. "He'd make sure he put his crown on when he pulled into the parking lot and he honked that horn and everybody knew he was coming through."

The elder Nagy wasn't always known as the End Zone King. After sporting a crown, his friend came up with the nickname.

"Originally, he just started wearing a crown, and then he got a cape. It stuck, and that's what he was," Nagy recalled.

As a fan who meant so much to the Texans, last year, the city of Houston made November 7th known as End Zone King Day.

"I got to show it to him," Nagy said. "He was really happy. You could tell he was honored."

The end zone king was never alone. His son David went to the games with him.

"A lot of people ask, what's your hobby, or what do you do on the side? This was more than our hobby, this was our life," Nagy said.

But their life came crashing down three years ago.

"He started to show signs of confusion," Nagy recalled. "It was a little worrisome."

He was given a year to live. Nagy fought for two years before losing his life.

"I can't explain how hard it's been," Nagy explained. "It's something you don't dream of. It hits you."

It's about to hit his son even more. This will be the first Texans season without his father.

Nagy went to the pre-season game against the Rams. It was a tough test for what's to come.

The real pain, he believes, will come when the regular season starts, and he'll see his dad's seat -- a throne without its king.

"I'll say a quick prayer," Nagy said. "I'll look up to him, and I know he's right there cheering the Texans on. The angel in the end zone."

He's the angel who might not actually be seated in the end zone, but that doesn't mean Texans fans won't see the king. His son plans to bring the crown this season, and carry on the legacy his father started.

Texans royalty that is needed as the Texans play without its king.