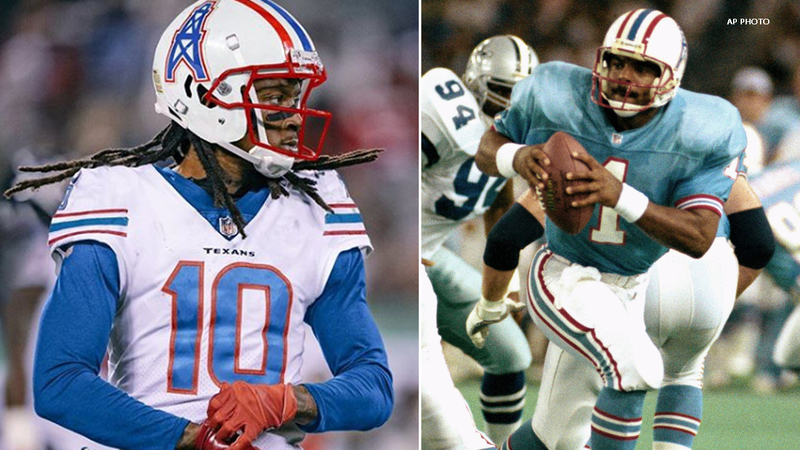 HOUSTON, Texas (KTRK) -- The dream of the Houston Texans wearing the Oilers' throwback jerseys will stay just that: a dream.

Earlier this week, Texans wide receiver DeAndre Hopkins posted a photo of himself in a Houston Oilers jersey on Instagram, asking followers "Who would like to see this?"

Naturally, he received an overwhelming response.

Teammate J.J. Watt has also mused about the Tennessee Titans, who used to be the Houston Oilers, giving up the rights to the iconic "Luv Ya Blue" uniforms of yesteryear, talking about it in a "Happy Birthday" tweet from the NFL last week.

"Thank you NFL. I'll check the mail for my present. (Gift idea hint: Get the Titans to give us the rights to the Houston Oilers throwback uniforms)," Watt tweeted.

However, any hopes of that happening have just been officially shut down.

Titans owner Amy Adams Strunk was asked by writer Paul Kuharsky whether the Oilers' garb will ever return to H-town. Her answer was clear.

"That's very interesting except the Oilers don't have anything to do with the Texans," Strunk explained.

"So that's a hard no?" Kuharsky asked.

"That's a hard no," Strunk replied.

The response probably isn't too surprising to Texans players or fans, though.

Last year when Watt tweeted about the topic, he said he understood that the Texans don't have the rights and reiterated that point again to Kuharsky, saying that not being able to have the colors doesn't mean he can't wish.

I understand why, but man it’s such a shame we can’t rock the baby blue Houston Oiler throwback uniforms one time.

You can watch the interview with Strunk here.