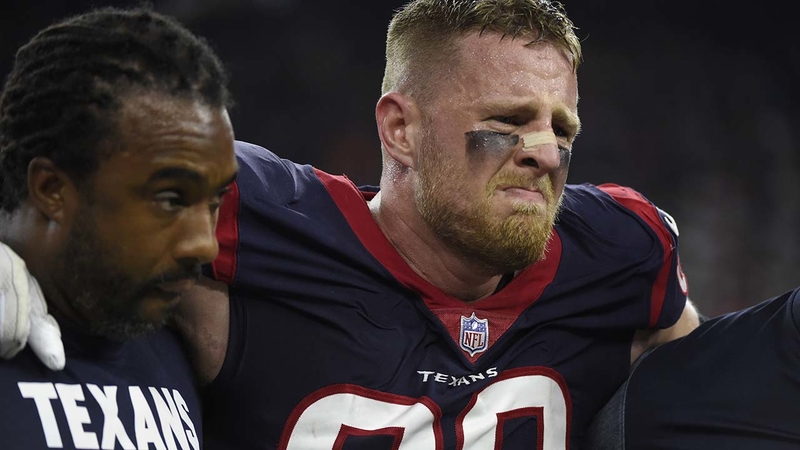 HOUSTON, Texas (KTRK) -- The Houston Texans will go on with their season without two of their star defensive players.

Alex Smith threw for 324 yards and three touchdowns to help the Kansas City Chiefs remain undefeated with a 42-34 victory over the Houston Texans on Sunday night in a game where J.J. Watt broke his left leg and Whitney Mercilus suffered a season-ending muscle tear.

Deshaun Watson's 48-yard touchdown pass got the Texans within six early in the fourth quarter before Smith extended the lead for Kansas City (5-0) to 32-20 on a 10-yard pass to De'Anthony Thomas with about 9 minutes left. Tyreek Hill padded the lead when he returned a punt 82 yards for a touchdown.

Head Coach Bill O'Brien talks to the media after Texans fall to the Chiefs.


Watson threw for 261 yards and five touchdowns, but the Texans (2-3) failed to recreate the magic they found last week when they scored a franchise-record 57 points in a victory over Tennessee.

Watt, the three-time Defensive Player of the Year, was injured in the first quarter and the team announced that he sustained a tibial plateau fracture, but didn't provide any details on how long he'll be out. The defensive end returned this season after missing the last 13 games last year after his second back surgery.

The team also confirmed linebacker Whitney Mercilus suffered a torn pectoral muscle after he went off the field early in the first quarter. Mercilus' injury will require season-ending surgery, the Texans said.

The Texans cut their deficit when Watson threw a 9-yard touchdown pass to Fuller in the third quarter. But the 2-point conversion failed, leaving them down 23-13.

Kansas City's Charcandrick West caught two touchdown passes and Travis Kelce had eight receptions for 98 yards in the first half, but didn't return after halftime and the team said he was being evaluated for a concussion.

The Chiefs were up by six when Smith found West on an 8-yard touchdown pass to make it 13-0 in the second quarter. Houston rookie D'Onta Foreman fumbled two plays later to give Kansas City the ball right back and the Chiefs tacked on a field goal.

Foreman stepped out of one tackle before plowing over Marcus Peters as he tried to tackle him before two other Chiefs finally brought him down after a 25-yard gain that got Houston to the 10 on the Texans' next drive. The Texans cut it to 16-7 when Watson found DeAndre Hopkins in the back of the end zone for a 6-yard touchdown pass with about two minutes left in the first half.

Smith then connected with West again, this time on a 4-yard TD pass to put the Chiefs up 23-7 at halftime.

The Chiefs led 3-0 early after a 35-yard field goal by Harrison Butker on their first drive. Watt was injured on the play before the field goal and fell to the ground while being blocked. Watt remained on his hands and knees for a couple of minutes while trainers checked on him.

They flipped him onto his back and were looking at his left leg. He was then helped to his feet and looked to be in a lot of pain and didn't appear to be able to put any weight on the leg as he was helped off the field by two Texans officials. He remained on the sideline under a tent for a few minutes before being taken to the locker room on a cart and then taken by ambulance to the hospital.

Butker added another field goal early in the second quarter to make it 6-0.

Kansas City rookie Kareem Hunt had 29 carries for 107 yards to give him four 100-yard rushing games this season.

Hopkins had four receptions for 52 yards with three touchdowns after catching two late scoring passes when the game was out of reach.