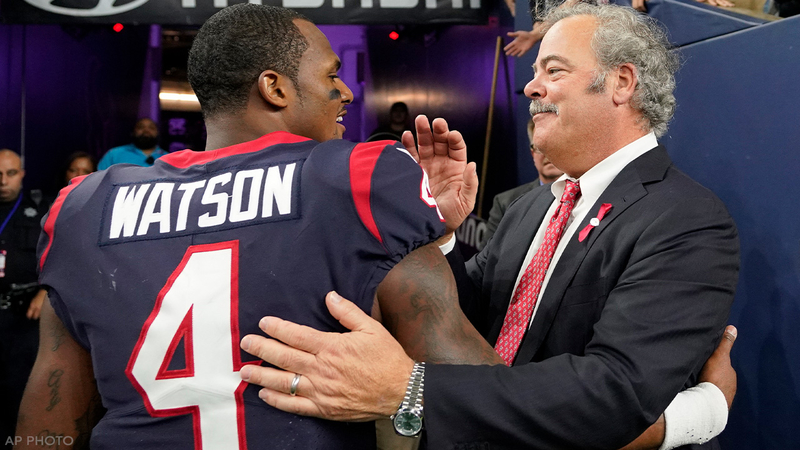 HOUSTON, Texas -- Texans chairman and CEO Cal McNair acknowledged he hasn't heard from Deshaun Watson since he hired Nick Caserio as general manager but said he hopes to speak with the franchise quarterback soon about the move.

"I've come to understand that it's been reported that Deshaun feels left out of the process, but he and I had several visits and I understood his point of view before meeting with candidates," McNair said Friday. "I've reached out to Deshaun about Nick's hire, and I look forward to him getting back to me when he returns from his vacation."

On Thursday, ESPN's Adam Schefter reported that Watson offered input on potential general manager candidates but that the Texans did not consider or consult with those endorsed by their franchise quarterback.

"Some things never change...." Watson tweeted Tuesday, with sources telling ESPN that the quarterback's feelings were directed at the way business was conducted by the Texans.

Watson met with McNair over Zoom during the season to discuss candidates and the future of the franchise, and in his end-of-season news conference, Watson said he told McNair he hoped the team keeps offensive coordinator Tim Kelly on staff.

McNair, who held a news conference for the first time since taking over for his father in 2018, spoke while introducing Caserio. When Caserio was asked about the rumors that Watson wanted to be traded after finding out about his hire on social media, the general manager said Watson "is our quarterback."

"Once we have an opportunity to spend some time together, we'll further our discussion," Caserio said. "Can't tell you how much respect and admiration that I have for him for who he is as a player and what he means to this franchise."

If the Texans were to trade Watson, they would have to absorb a salary-cap charge of $22 million.

The Texans hired Caserio just over four months after firing Bill O'Brien, the team's former head coach and general manager. Despite hiring a coach who had spent the previous 20 years in New England, McNair said the Texans aren't trying to duplicate the Patriots' culture.

"With respect to their organization, we do not consider ourselves Patriots South," McNair said. "We are here to lead this team the Texans way."