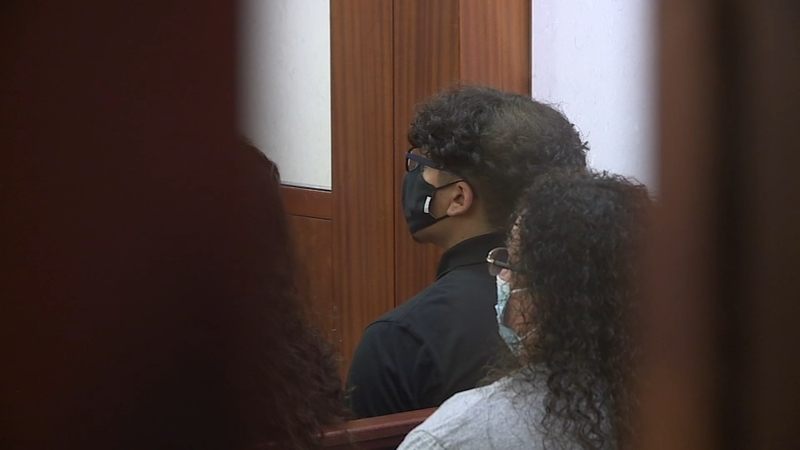 HOUSTON, Texas (KTRK) -- Emotions ran high in court Thursday during another attempt by prosecutors to have bond revoked for the 17-year-old accused of killing his 15-year-old girlfriend.

Frank DeLeon is charged with murder and accused of shooting Diamond Alvarez 22 times at a park in their southwest Houston neighborhood on January 11.

RELATED: 17-year-old boyfriend charged with murder of teen girl killed while walking her dog
During a hearing, one of Alvarez's male family members went after the accused killer, who was also sitting in the gallery with his family. Law enforcement from surrounding courtrooms rushed to assist.

The man was taken into a room to calm down and eventually escorted out of the courthouse by police who were heard saying that he was cooperating.

"You have to remember the emotion in this family is high," Cesar Espinosa with FIEL said as he stood alongside Alvarez's family. "We ask the public to put yourself in this family's shoes. What would you do if you had to face your daughter's killer in court?"

Thursday the family was back in court hoping Judge Hazel Jones would revoke his bond, but she did not.

"He gets chances after chances," Blanca Mejia, the victim's aunt, said.

DeLeon has been on house arrest with a GPS ankle monitor since mid-January when he posted his $250,000 bond.

The company monitoring his ankle monitor noted a violation on March 28 from 5:10 to 5:12 p.m. GPS indicated that DeLeon traveled away from his home.
The 17-year-old suspect was taken into custody on Monday.

During an emergency hearing on Wednesday, the monitoring company testified that it may have been a glitch that caused the violation notice. Judge Jones re-instated his bond and he returned to his house arrest.

Alvarez's family lives in the same neighborhood where DeLeon is serving his house arrest.

Thursday, both parties showed up to court for another hearing where the state showed the judge a map of where DeLeon allegedly went during the time in question and asked that his bond be revoked. She said they did not meet the burden to revoke bond and the suspect once again left the courthouse with family.