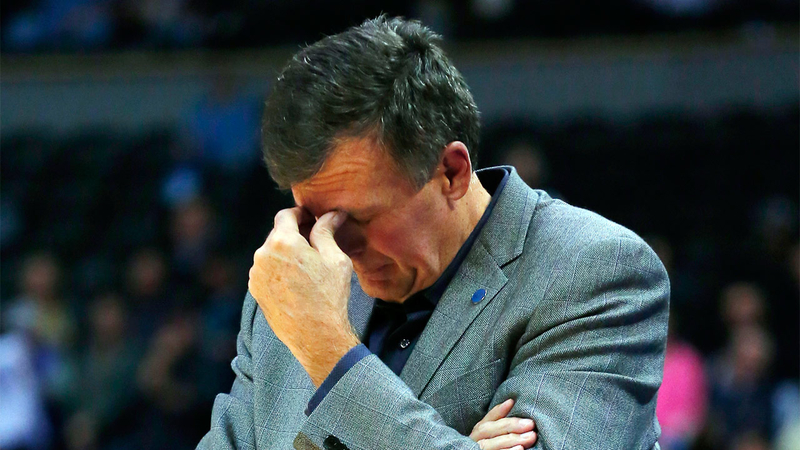 Separate source says kevin McHale was NOT notified via text. NOT NOT NOT

The Rockets have failed to reach 100 points during their current four game losing streak. They are also averaging 20 fewer points in their losses overall this season.

McHale was in his fifth season with Houston and is coming off an 82-56 season where the Rockets reached the Western Conference finals for the first time since 1997. The 57-year-old Hall of Fame player went 193-130 with the Rockets and was in the first year of a three-year extension worth more than $12 million he signed in December.

Kevin McHale by the numbers, through the years. (AP Photos)

Social media was quick to react to the news, including Dallas Mavericks small forward Chandler Parsons.

What a shame about Coach Mac. He really helped me throughout my career and one of my favorites coaches and people of all time. Smh.

If it's true the Houston Rockets fired Coach McHale they made a big mistake.

Kevin McHale got fired? After leading the Rockets to the Western Conference finals that's blasphemy if anything sit Harden down and tell

Wow the Rockets fire Kevin McHale that's crazy. He just took him to the Western Conference Finals. Then after a 4-7 he gone smh

Kevin McHale was about the only thing NOT broken in Houston. Those players don't deserve to win.

The guy lost his daughter, still brought us a winning product. Thank you Kevin Mchale. It was awesome watching you coach my team. #Rockets

Do you feel the firing of Kevin McHale was justified?

Do you feel the firing of Kevin McHale was justified? #abc13sports @HoustonRockets

Related topics:
sportshoustonhouston rockets
Copyright © 2021 KTRK-TV. All Rights Reserved.
TOP STORIES
Arrest made in case of Alvin abduction, sexual assault of a minor
20-year-old shot to death during break-in of Conroe home, police say
Man accused of dismembering mom's body after murder appears in court
Houston Astros on pace for record beer year
Astros Game 6 guide: Closures around Minute Maid Park back on tonight
Cleveland man indicted in connection with U.S. Capitol attack
The University of St. Thomas offers low-cost counseling services
Show More
JJ Watt on Texans: 'It hurts me to see where' fan base is now
More truck drivers needed to assist with US' supply chain shortage
Don't get stuck in these traffic closures this weekend
Warrant: Baldwin didn't know weapon contained live round
Prop guns: What they are and how they can kill
More TOP STORIES News