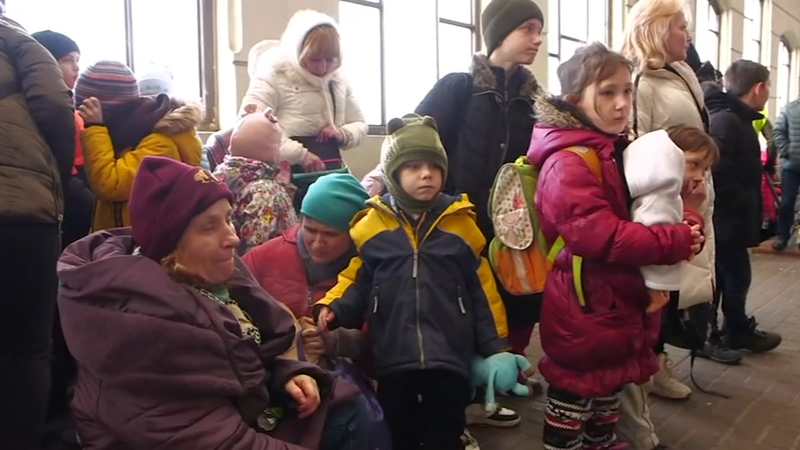 Resettled refugees in Houston empathize with those evacuating Ukraine

HOUSTON, Texas (KTRK) -- The United Nations estimates that more than half a million people have fled from Ukraine after Russia invaded the country on Feb. 24.

The AP reported that long lines of cars and buses were backed up at checkpoints at the borders of multiple countries. Forced to leave everything behind, their plight and traumatic experiences resonate with refugees who have resettled in Houston.

For Tawheed Mayar, 21, the wound is still fresh after fleeing Afghanistan just six months ago with his family. It was Aug. 15, 2021, when Taliban fighters entered the capital in Kabul. The country's president fled the country and its government eventually collapsed.

"I remember that day when everything suddenly collapsed. Everything and the situation changed. No one knew the Taliban would take Afghanistan easily," said Mayar.

He said his family didn't know what they would do or where they would go. This wouldn't be the first time his parents have been displaced from warfare, fleeing to Pakistan before. But thanks to one of his brothers who served as an interpreter for the U.S. Marine special operations team in Afghanistan, he said some of them were able to make their escape this time at the airport.

After nearly two months of moving around to different military bases, they finally resettled in Houston. But the challenge now is rebuilding their lives all over again.

"It was the worst feeling to leave it all behind. I had to leave my sister in Afghanistan. I left my friends, my job, my house, my college. All I brought with me was one pair of clothes," he said. "I'm glad that some of us are safe now. But to make and start a new life, to reach for what you want, it will be a big challenge for me."

Refugees in Houston said the plight that Ukrainian refugees are facing will be difficult, traumatic, and life-changing. But they hope the rest of the world will take all of them in with love and compassion

Mmunga Mluli, who is now a U.S. citizen, came to the United States in 2010, when he was just 11 years old. His parents fled from the civil war in Congo decades ago and sought asylum at a refugee camp in Tanzania, where he was born. The hardships they experienced are hard for him to forget.

"Hunger. Thirst. We had no water, no food, no electricity. We used to live in a house of grass," Mluli said. "During those times, there were so many people being killed. The situation we were in was... you stay, you die. For you to live, you had to go somewhere else."

While he was grateful for the opportunity to pursue a better life in the U.S., Mluli said that starting over in a new country came with its own set of challenges.

"In Africa, I never felt like an outcast. But when we came over here, I felt like I didn't belong, especially as a kid going to school with no English. It was hard," he said. "But my parents pushed me to pursue an education because they wanted better opportunities for me. They were limited in the jobs they could get."

Ukraine's Interior Ministry reported Sunday that 352 civilians have died and 1,684 are injured since the Russian invasion. Seeing what they are facing overseas, Mayar said it brings flashbacks of what he went through in 2021.

"It is the same feeling that the Afghan people went through. When I see the news about Ukraine, I see the pictures coming back to my eyes about my own country, my own people, and my own journey," Mayar said. "I understand what they're going through."

Mluli and Mayar said the plight that Ukrainian refugees are facing will be difficult, traumatic, and life-changing. But they hope the rest of the world will take all of them in with love and compassion, no matter their race, just like how the U.S. did with them.

"Imagine leaving something you knew your whole life. Now you have to move here, just because someone doesn't want you to be there no more, or they're trying to take over your land," said Mluli.

"I just request that the neighbors of Ukraine hug the refugees and open the borders for them in this bad situation," said Mayar.

One group of Nigerian students having been repeatedly refused entry into Poland have concluded they have no choice but to travel again across Ukraine and attempt to exit the country via the border with Hungary.

The AP pointed out how language used by leaders of neighboring countries highlights the difference in treatment to refugees of African and Middle Eastern descent. On Sunday, the president of Nigeria issued a statement in response to alleged discrimination of African students who are being denied at the border. The UN Refugee Agency said Tuesday that they would be addressing these concerns. Mluli said hearing about these reports was heartbreaking.

"If you know there's danger behind where they're coming from, and then you try to push them away, so they could go back to where the danger is, it doesn't show humanity," he said.

Both now serve as mentors for the Amaanah Refugee Services here in Houston. They said their passion is to give back and help those who are going through what they did. The organization focuses on relief and social welfare, addressing barriers, such as social isolation and child-learning gaps that affect assimilation.