A suspect was shot by five HPD officers after he crashed on Westheimer when a chase ended. Now, its unclear if he was ever armed.
KTRK
By Charly Edsitty 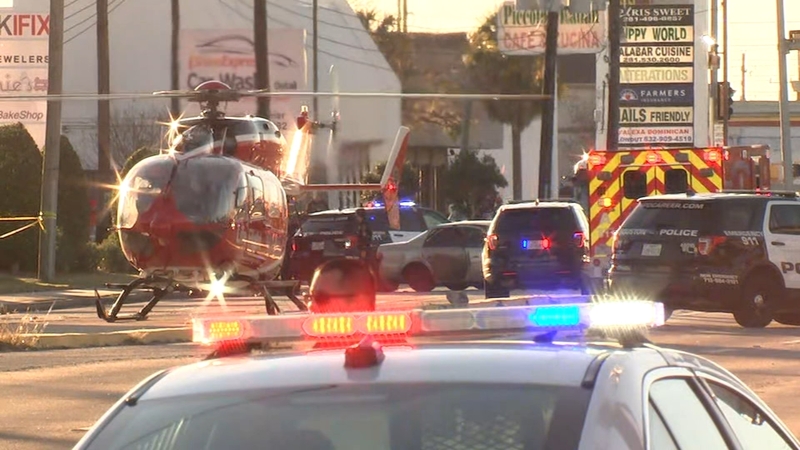 HOUSTON, Texas (KTRK) -- A 40-year-old suspect is recovering in the hospital after he was shot multiple times by five Houston police officers on Sunday.

Now, investigators say it is unclear if the man was even armed at the time of the shooting.

The situation started as a chase on Houston's westside and ended with the shooting.

Investigators say surveillance video will be key in showing exactly what happened in the seconds before the shooting happened. There are a lot of businesses in the area, so the hope is that there is video that shows what happened.

After the shooting, HPD said four officers and one sergeant are on administrative leave until HPD is able to further investigate and review surveillance video.

It is standard protocol to put officers on administrative leave during a shooting investigation.

The suspect was shot multiple times. Police said he is in serious condition, but is expected to survive.

HPD initially reported the suspect fired shots at officers, who then returned fire and hit the man. Now, HPD Chief Troy Finner says the suspect may not have even been armed.

Police received a call from a motorist at about 3:40 p.m. Sunday who said they were following the suspect, who was accused of robbery.

When police located the car around Leawood Boulevard and Bissonnet Street, the chase with the suspect began. It lasted about 15 to 20 minutes.

During the chase, the suspect crashed into two cars before finally hitting a median and crashing.

When the suspect got out of his car, officers opened fire.

It's unclear exactly how many times the suspect was shot, but he had to be taken to the hospital via LifeFlight.

Police have not identified the chase suspect, but described him as a 40-year-old Black man who has a criminal history. No charges have been filed.

Investigators said there was a female passenger in the suspect's vehicle during the chase, who was miraculously uninjured as bullets went flying.

HPD initially reported that the suspect fired shots at officers, who then returned fire and hit the man in the 13400 block of Westheimer Road.

"Shots fired, shots fired. Suspect down," an officer can be heard saying on radio traffic.

Then during a briefing Sunday night, HPD Chief Troy Finner said the department could not confirm the suspect even had a weapon.

No officers were reported injured.

This is the third officer-involved shooting for HPD in just one week.

A witness who said her car was hit by the chase suspect shared with ABC13 what she saw.

"It really surprised me and it scared me because I didn't know what he was waving when he was going through the traffic, pushing cars left and right," Lilly Zamora said.

"Our officers and citizens, we're in tough times. We'll do what we can to keep the city safe and at the end of the day, we are the people who hold the community together. If we make a mistake, we fess up," said Finner during Sunday's briefing.