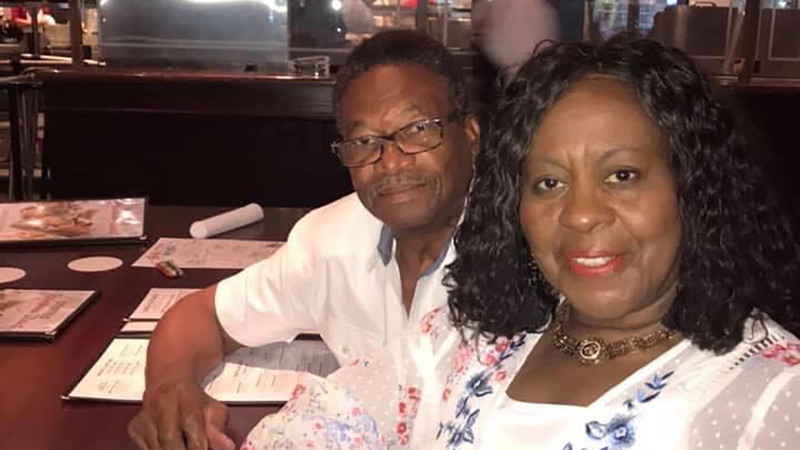 HOUSTON, Texas (KTRK) -- A family is mourning the loss of the 'backbone' of their family days before Thanksgiving.

Walter Cooper, 71, was killed in a collision with Houston police on Saturday evening. He was pulling off of Darien Street onto Ley Road when a police unit headed to a weapons call hit his car, causing it to spin across the street and land in the grass. Cooper was taken to the hospital where he died.

His son, Rev. Lawrence Cooper, and daughter, Dr. Brandi Cooper-Lewis, will bury their father two months after burying their mother.

"My plan was to have my dad with me for Thanksgiving," Cooper-Lewis said. "We were cooking. He was going to help me begin decorating because that is what my mom would always have him do. So I was going to give him that purpose, 'Dad, let's decorate. Let's get things together for the holidays.' Now we don't have that."

Cooper and his wife were married for 51 years and his children said he was still trying to adjust to life without her.

"I had just talked to him the day before," Cooper said. "We were talking about what we were going to do for the weekend, how we were going to process everything for the holidays being that my mom is no longer here. We even had a grieving session where we both were kind of crying. It was so traumatic to say the least, because family is huge to us."

Both of his children said getting the news that he died from police was something they would not wish on anyone. They described him as the patriarch of the family who set an example for the other men.

"He was the one who set the example for them, how to work, how to provide, how to take care of things," Cooper-Lewis said.

They were able to see surveillance video that showed the crash from a nearby convenience store. Cooper-Lewis said she knew after seeing the video that her father died on impact.

WATCH: The video below from the scene shows damage from the crash

A driver is dead after a fatal crash involving Houston police near Trinity Gardens Saturday afternoon. Two Houston police officers have been transported to local hospitals with minor injuries and police are asking people to avoid the area.

"My heart broke for my dad because the one thing that I think about is he was such a good man and a good father," Cooper-Lewis said. "The way that he transitioned because of someone, from what I can see, no sirens or lights were on, someone not doing their due diligence. As professionals, we all have what we call due diligence, and someone neglecting that led to my dad's death, in my opinion. Looking at the vehicle my mom made sure that before she transitioned was paid off. She didn't want him to have that burden, because he was retired. She was still working, so she made sure that was paid off. That vehicle that was basically new was destroyed."

Nuru Witherspoon, the family's attorney, said they plan to file a wrongful death suit against Houston police this week.

"My initial reaction to the video is that the Houston Police Department killed Walter Cooper," Witherspoon said. "When you look at the video you see a police unit speeding through a residential area. To me, that is an absolute lack of concern or care that they are supposed to serve and protect."

The city declined to comment since the investigation is open and litigation is pending.