HOUSTON, Texas (KTRK) -- A Houston police K-9 was stabbed while trying to catch a suspect in the Heights Saturday morning.

A woman called police at about 6:30 a.m. reporting her son went missing after she said he went looking for guns and threatened to kill himself. When officers arrived to the scene, the woman's son was not located.

Police received another call at about 8 a.m. after the suspect returned to the 900 block of Memorial Heights and attacked two males and attempted to steal their car, police say.

The suspect walked into the H.E.B. on Washington, where he reportedly stole a phone charger. Later, the suspect was found in a parking garage just south of I-10 behind the Walmart near Yale and I-10.

Police set up a perimeter to locate him. The suspect managed to jump buildings and make his way back onto the street toward I-10 and the service road where officers said they found him again.

After a foot chase leading into another neighborhood, K-9 Nate was released and caught the suspect behind a building.

An officer heard Nate bark and witnessed the suspect holding a large butcher knife, like the one you would find in a kitchen, and stabbed Nate.

An HPD K9 has been transported to an emergency animal hospital at 8921 Katy Freeway following a confrontation with a suspect where the suspect stabbed the K9. HPD officials and PIO are en route to the hospital. Media staging will be at this address. #hounews pic.twitter.com/GhGcGURRKF

The suspect dropped the knife, but officers said they were able to take him into custody. A K-9 handler took Nate to the vet where he underwent surgery.

Police described the suspect as a white male in his mid-20's who sustained minor injuries. Nate suffered a deep stab wound to the chest.

The man was charged with aggravated robbery, evading, aggravated assault of a peace officer, according to police.

K-9 Nate has been with the department for three years and recently became a SWAT dog two years ago. At about 3 p.m. on Saturday, HPD provided an update on Nate's condition and said the surgery had gone well.


"Our thanks to everyone who has said prayers for his recovery today. And our deepest appreciation for the amazing staff at VERGI Animal Hospital," the tweet read.

Update: K9 Nate is out of surgery and resting well. Our thanks to everyone who has said prayers for his recovery today. And our deepest appreciation for the amazing staff at VERGI Animal Hospital.

Below are some photos of Nate. pic.twitter.com/0ZZwu81PB0

On Sunday, authorities gave anther update on Instagram. The update read that Nate was spending the night at home and returning to the vet Monday morning to have his bandages changed and blood work done. 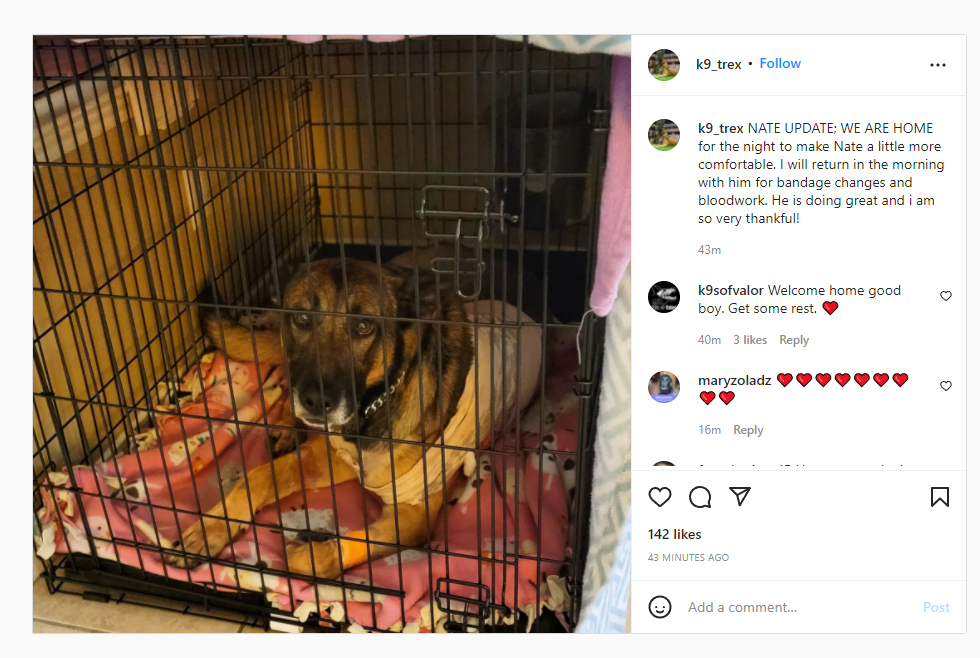