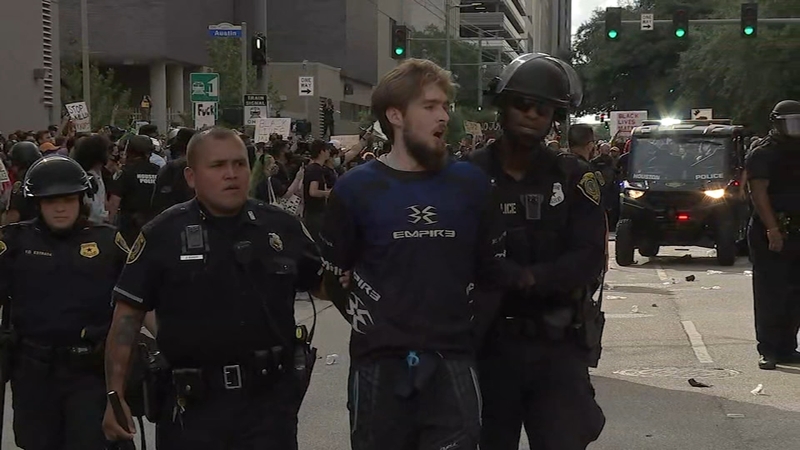 HOUSTON, Texas (KTRK) -- During a protest and march in downtown over the death of George Floyd, things turned violent.

Houston Police Officers' Union president Joe Gamaldi said in a tweet on Friday that officers were attacked and hospitalized during the protest.

Our officers who were attacked are in the hospital, patrol cars ruined, businesses damaged, this is not who we are as a City and as a community. We will protect your right protest, but we will not allow our city to decay into chaos.

A woman was asked to leave the protest after she allegedly took out a rifle.

Houston Police Chief Art Acevedo said he's going to arrest the woman for trying to start a riot during a peaceful protest.

"We demand accountability and justice for black lives in Houston and around this country!" organizers said in a statement. "George Floyd is one of the many victims of police violence and should be alive!"

The crowd marched through downtown to get to city hall, blocking traffic and at times chanting "No justice, no peace" and "Say his name. George Floyd." Many held up signs that said, "I Can't Breathe" and "Justice For George."

In the video above, thousands took to the streets of Houston to protest the wrongful death of George Floyd and police brutality throughout the United States.

Eventually the protesters ended up alongside U.S. Highway 59. A group of about 60 to 70 shut down the freeway for at least half an hour.

Houston police accompanied the protesters as they marched for less than half a mile along the freeway before they walked off of it.

One of those protesting Floyd's death was 19-year-old Jimmy Ohaz, who came from the nearby city of Richmond, Texas.

"My question is how many more, how many more? I just want to live in a future where we all live in harmony and we're not oppressed."

During the protest, a man was also arrested after many people were caught throwing rocks at police cars.

In the video above, ABC13 covered the protest and march led by Black Lives Matter for George Floyd who was a Houston native.

The event was organized by Houston's Black Lives Matter group after the death of Floyd who was killed at the hands of police officers in Minneapolis on Monday. Floyd died after a police officer was caught on video kneeling on his neck for at least seven minutes.

Floyd said multiple times that he couldn't breathe as dozens of bystanders stood by recording the officers.

Four Minneapolis officers involved in the arrest were fired this week. State investigators on Friday arrested the officer who was seen kneeling on Floyd's neck. The officer has been identified as Derek Chauvin. Chauvin is now charged with murder.

"Whether Mr. Floyd was from this city or not, every city in every state in this country has been impacted by the loss of life, and the way Mr. Floyd lost his life," Houston Mayor Sylvester Turner said on Thursday.

Violence erupted around the country following Floyd's death, the worst of which happened in Minneapolis. Protestors took over the streets, and looters broke into several businesses.

"I feel a special obligation as a mayor of this city to make sure that, for example, we are doing everything we can within our own organization to improve situations, to make things better," said Turner.
While Houston city leaders have widely condemned the police action against Floyd, including Houston Mayor Sylvester Turner and Police Chief Art Acevedo, rally organizers had a harsh rebuke.

"We ARE protesting you too, @artacevedo, we are not players... we are citizens calling out injustice," Black Lives Matter Houston founder Ashton Woods said on Twitter.

The irony! Art Acevedo saying this when @houstonpolice is responsible for 6 deaths of Black & Brown men. They aren't strong when it comes to transparency. We ARE protesting you too @ArtAcevedo, we are not players... we are citizens calling out injustice. #GeorgeFloyd #BLMHOU https://t.co/gjY8nLNi7i pic.twitter.com/A1ravpEpyk